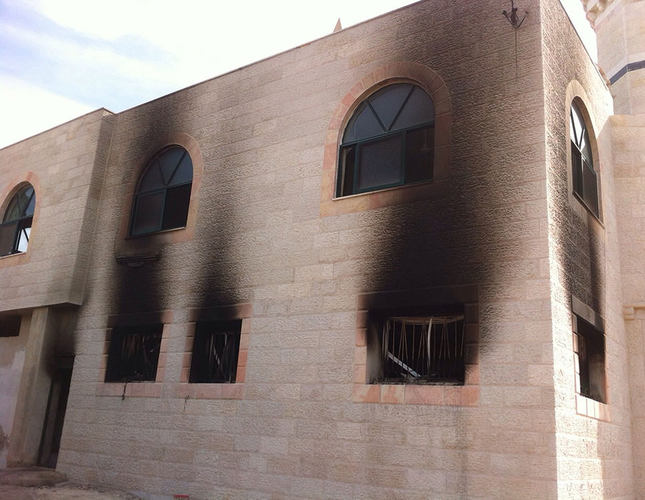 by AA Nov 12, 2014 12:00 am
A group of extremist settlers torched parts of a mosque in the occupied West Bank in the early hours of Wednesday, eyewitnesses have said.

The first floor of the mosque in Ramallah's al-Mogheer village was completely burned and the second floor sustained partial damage from the fire, eyewitnesses told Anadolu Agency.

The settlers have also scrawled "Death to Arabs" and other anti-Arab slogans on the mosque's walls, the witnesses added.


Officials could not be reached for comment on the incident thus far.

Frequent violations of Muslim houses of worship in the occupied Palestinian territories by Jewish settlers anger Palestinians and occasionally lead to violent confrontations.

Tension has been running high in East Jerusalem since late last month, when Israeli authorities temporarily closed the Al-Aqsa Mosque complex after an extremist rabbi was injured in a drive-by shooting in West Jerusalem.

Unrest mounted further after Israeli forces killed a young Palestinian man suspected of shooting the rabbi in a raid on his East Jerusalem home.

Further aggravating the situation, several Israeli parliamentarians have entered the Al-Aqsa complex in recent weeks, drawing the ire of Muslim worshipers and official condemnation from Arab and Muslim countries.

Groups of Jewish settlers, too, have recently forced their way into the religious site, triggering clashes between Muslim worshipers and Israeli forces.

At least two Israelis - -one police officer and one settler - were killed and others injured over the past week in attacks by Palestinians.
For Muslims, Al-Aqsa represents the world's third holiest site. Jews, for their part, refer to the area as the "Temple Mount," claiming it was the site of two Jewish temples in ancient times.

Israel occupied East Jerusalem during the 1967 Middle East War. It later annexed the holy city in 1980, claiming it as the capital of the self-proclaimed Jewish state - -a move never recognized by the international community.