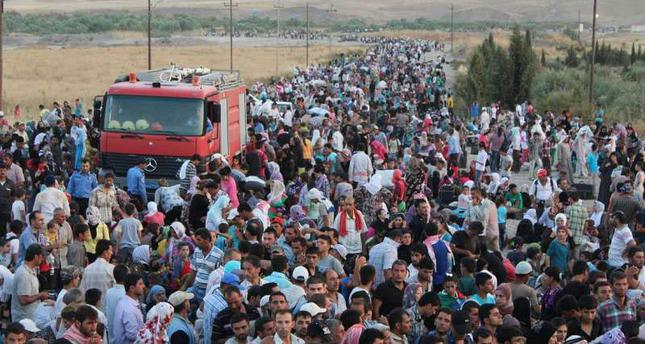 by Daily Sabah with Agencies
Nov 13, 2014 12:00 am
About 13.6 million people, equivalent to the population of London, have been displaced by conflicts in Syria and Iraq, many without food or shelter as winter starts, the UN refugee agency said on Tuesday.

Head of United Nations High Commissioner for Refugees' (UNHCR) Middle East and North Africa bureau Amin Awad said "The whole humanitarian community is facing shortfalls. People are becoming numb." "Now when we talk about a million people displaced over two months, or 500,000 overnight, the world is just not responding," he told reporters in Geneva.

The 13.6 million include 7.2 million displaced within Syria – an increase from a long-held UN estimate of 6.5 million, as well as 3.3 million Syrian refugees abroad, 1.9 million displaced in Iraq and 190,000 who have left to seek safety. The vast majority of Syrian refugees have gone to Lebanon, Jordan, Iraq and Turkey, countries which Awad said "are putting us all to shame" with their support for homeless Syrian families. "Other countries in the world, especially the Europeans and beyond should open their borders and share the burden," he added.

UNHCR says it is short of $58.5 million in donations to prepare 990,000 people for winter, money that would cover basic supplies such as plastic sheeting and warm clothing. Without funds to cover all its needs, the agency is prioritizing assistance to people at higher, colder altitudes and then the more vulnerable such as newborn babies.

Awad said Russia and China, both in the U.N. Security Council whose members also include the big Western powers, have thus far failed to agree action to defuse the war in Syria, have come in bottom of a list of top donors and should contribute more. "Politically they cannot really be indifferent, therefore humanitarian is an imperative and it has to be put first and foremost if there is no (political) settlement ... They need to contribute one way or the other, like the others do," he said.

As a result, as many as one million displaced people desperate for blankets, kerosene, warm clothes and other items needed to keep warm and dry may have to go without assistance, it warned. "I wish we could support everybody, and I wish that we could keep everybody warm," Amin told reporters in Geneva, adding however that "the world is not responding." "Many fled with nothing," UNHCR spokeswoman Melissa Fleming told reporters.

The agency had planned to help 1.4 million people in Syria and 600,000 people in Iraq, but now expects to reach only 620,000 in Syria and 240,000 in Iraq. As a result, UNHCR said it was being forced to make "some very tough choices over who to prioritize." "The needs are massive but funding has not kept up apace with the new displacement," Fleming said. Those at higher, colder altitudes, as well as vulnerable people such as the sick, the elderly and newborns, are first in line for aid, Amin said. He noted that 11 young children froze to death in Syria last year. "The same can happen this year with children, elderly and frail persons," he warned.