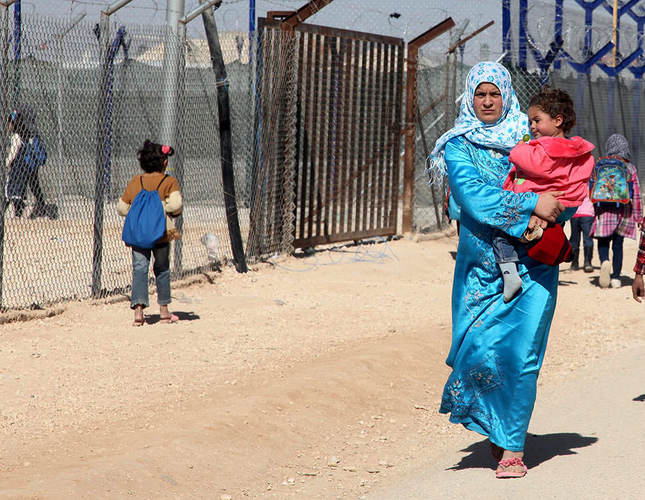 by daily sabah
Nov 14, 2014 12:00 am
Syrian women and girls are currently facing severe human rights abuses, violations and humiliations, according to a report released by the International Rescue Committee (IRC) "Are We Listening? Acting on our Commitments to Women and Girls Affected by the Syrian Conflict."

The report focused on the conditions of Syrian women and girls "subject[ed] to sexual and gender-based violence, coerced into early marriages, overwhelmed by economic strife, and psychologically scarred by loss in a war that seemingly has no end."

As the continuing conflict in Syria leads to more people being internally displaced or seeking refuge in neighboring countries, Syrian women and girls have become the most vulnerable group affected by the crisis, facing "a wall of obstacles" in exile.

Addressing the needs of women and girls in humanitarian settings, the report shows that some of the challenges facing displaced women and girls in the region are sexual exploitation and an extreme level of harassment, domestic violence, early and forced marriages and limited access to education and health care. Many women and girls are exposed to violence and harm, and do not feel secure, with security conditions in refugee camps often wanting. "Only one in 10 women come forward to report violence perpetrated against them," said the report, stressing increasing incidents of violence against Syrian women in refugee camps in Jordan.

Since the outbreak of the civil war in Syria in March 2011, an estimated 9 million Syrians have fled their homes in order to seek refuge in neighboring countries or have been internally displaced. As reported by the United Nations High Commissioner for Refugees (UNHCR), more than 3 million refugees have been residing in Syria's immediate neighbors Turkey, Lebanon, Jordan and Iraq.

However, as the number of civilians fleeing increases, the ability of neighboring countries to handle the flow of people decreases. Neighboring countries providing hospitality to Syrian refugees have struggled to cope with Turkey, Lebanon, Jordan and Iraq the only countries sharing the burden of the conflict. As the number has reached into the millions, only 150,000 Syrians have declared asylum in the EU.

Another report released by the IRC called "No Escape: Civilians in Syria Struggle to Find Safety across Borders" has called on the international community to do more to protect Syrian civilians. "From the start of the Syrian conflict in March 2011 until August 2014, only 7,000 refugees were resettled worldwide … European countries are not doing enough," the report indicates.