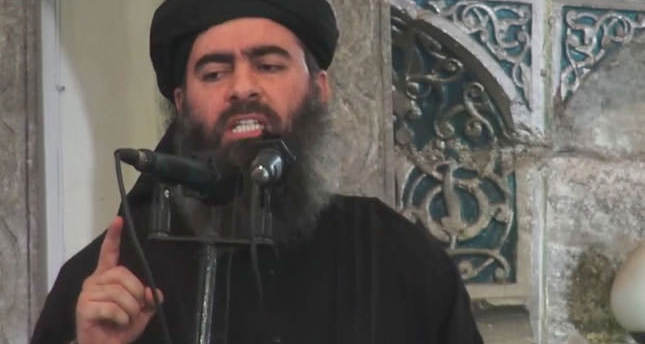 An audio recording allegedly belonging to ISIS leader Abu Bakr al-Baghdadi was released after claims he was killed in a U.S. airstrike warning countries battling ISIS that the group will continue its struggle

Islamic State of Iraq and al-Sham (ISIS) released a 17-minute-long audio, allegedly belonging to the leader Abu Bakr al-Baghdadi, on late Thursday. Al-Baghdadi who was allegedly killed in a U.S. airstrike that targeted an ISIS convoy in Iraq on Nov. 7, resurfaced once again in a live recording released on the Internet. In the 17-minute message, the man purported to be Baghdadi vowed that ISIS, which has overrun swathes of Iraq and Syria, will continue to expand despite airstrikes by the U.S.-led coalition, and that its opponents will be drawn into a ground war. "Be assured, O Muslims, for your state is good and in the best condition. Its march will not stop and it will continue to expand," said the man in the recording.

His voice sounded like Baghdadi's but whose identity could not be independently confirmed. "Soon, the Jews and Crusaders will be forced to come down to the ground and send their ground forces to their deaths and destruction," he said.

Touching the announcement of that 1.500 U.S. soldiers will be sent to Iraq for advising Iraqi forces during the struggle against ISIS, the man said it was the start of the ground war between the two sides. "America and its allies are terrified, weak, and powerless," he said. "Oh soldiers of the Islamic State, continue to harvest the [enemy] soldiers," the recording exhorted in a key passage. "Erupt volcanoes of jihad everywhere. Light the earth with fire under all the tyrants and their soldiers and supporters."

The speech also referenced the decision by Ansar Beit al-Maqdis, Egypt's militant group, to pledge allegiance to Baghdadi and ISIS, which was announced after the strikes.

U.S. State Department Spokesperson Jen Psaki told reporters on Friday the State Department could not confirm the authenticity of the tape, but said, "clearly the brutality, the rhetoric, the efforts to incite by any leaders of [ISIS] is not a new phenomenon." ABC News reported that a U.S. intelligence official said, "We are analyzing the audio to determine whether it's authentic."

The U.S. said that coalition aircraft launched strikes targeting ISIS leaders in the area of their northern hub of Mosul, setting off a flurry of speculation that Baghdadi was wounded or killed. Some reports meanwhile pointed to another alleged strike near Iraq's border with Syria, saying Baghdadi was hit there instead. But officials in both Iraq and the United States have made clear that no one is yet certain about Baghdadi's fate. Pentagon spokesman Colonel Steven Warren said Monday that "the bottom line from our perspective is we simply cannot confirm his current status." And senior Iraqi officials from the interior and defense ministries and the intelligence service said investigations were ongoing. A spokesman for ISIS said Baghdadi was wounded in the airstrike. "Do you think that the Caliphate would end just because the caliph is dead," Mohammad al-Adnani, the spokesman, wrote in a Twitter account last Sunday, saying Baghdadi's health was in good condition. He did not elaborate further.

Meanwhile, Iraqi government forces got within a kilometer of the country's biggest refinery on Friday, the closest they have come to breaking an ISIS siege of the facility during months of fighting, two army officers and a witness said.

Fighting raged in a village between the complex and the nearby town of Baiji, near a deserted area believed to contain roadside bombs planted by the militants that has been preventing an advance, they said. "We are about one kilometer from the refinery. ISIS militants are escaping to the direction of a river. Airplanes are targeting them," said an army captain. A witness said security forces crossed a bridge close to the refinery, 200 km north of the capital. ISIS fighters seized the city of Baiji and surrounded the sprawling refinery in June during a lightning campaign through northern Iraq.