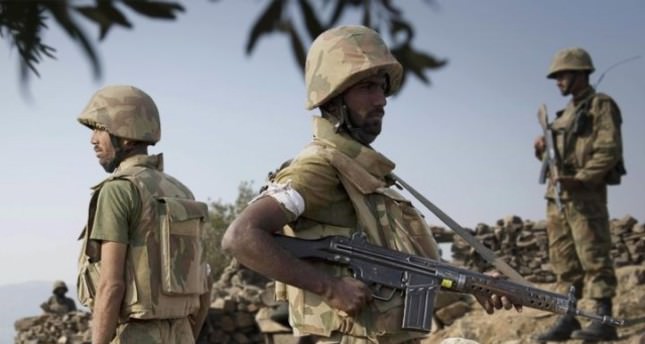 by reuters
Nov 16, 2014 12:00 am
The Pakistani army has killed 1,200 suspected militants in an anti-Taliban offensive during the past five months, seriously reducing the group's ability to carry out attacks, senior officers said on Sunday during a rare trip to the conflict zone. The ongoing operation has targeted the militant stronghold in North Waziristan, a mountainous region that borders Afghanistan and has acted as a staging post for deadly attacks in both Afghanistan and Pakistan. The offensive was launched as Western forces began withdrawing from Afghanistan. In the center of Mir Ali, the second largest town in the region, there was hardly a building untouched by the fighting.

Major General Zafarullah Khan, the officer in charge of North Waziristan, said that a widely-predicted wave of violence in response to the operation had failed to materialize. "The action which was expected has not come," he said on Saturday, picking his way through shattered buildings as he pointed out places he said were used for torturing prisoners or producing propaganda videos. "Significant successes have been made."

The military had killed nearly 1,200 militants since the operation began, he said, but refused to show their pictures out of respect for the dead. Another 230 had been arrested, and around 132 tons of explosive recovered so far, he said. Large amounts of weapons, ammunition and many vehicles had also been seized, he said, showing off a U.S.-made Hummer jeep whose windscreen had been shattered by bullets. Many of the areas the military moved into had been booby trapped, Khan said, and soldiers were going house to house to defuse bombs. "They have planted (them) in houses, they have planted (them) in the streets, they've planted (them) even in the trees," he said.

The militants generally rely on bombs and ambushes to engage the military rather than risking an open battle. On Sunday, officials said four soldiers were killed and at least eight were missing after an attack on their check post in North Waziristan's Datta Khel region. Khan would not be drawn on how long the operation might take. Most of the civilian population of North Waziristan - estimated are around a million people - were ordered to leave before the operation began. Many now face a harsh winter away from their homes and businesses, reliant on food aid and cramped quarters with relatives. When they return, many will find their homes destroyed in the fighting.