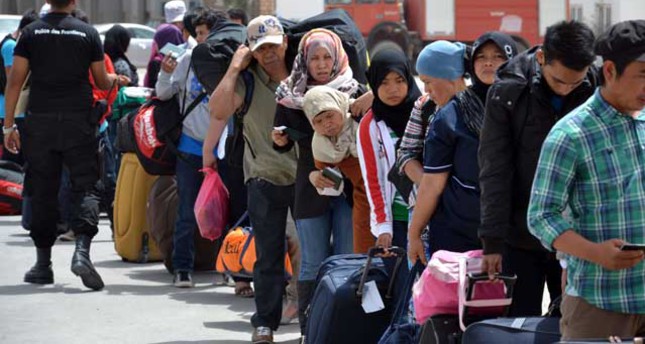 by Daily Sabah Nov 16, 2014 12:00 am
With Libya long-suffering from insecurity and instability, the scale of internal displacement has reached an alarming point as a result of the escalated conflict. Due to ongoing intense fighting among rival armed groups in western, eastern and southeastern Libya, more than 100,000 people have been forced to flee their homes in the past month, according to the United Nations' refugee agency, which released a statement on Nov. 14. "In all, we estimate that more than 393,420 people have become internally displaced in Libya since violence escalated in May. They are scattered across 35 towns and cities and are in dire need of shelter, health care, food, water and other basic commodities," United Nations High Comissioner for Refugees (UNHCR) spokesman Adrian Edwards said in Geneva, stressing the growing insecurity and worsening humanitarian conditions for Libyans living in conflict-stricken areas.

As the number of civilians fleeing from Libya has been increasing, the U.N refugee agency urged the international community to allow civilians access to their territories, and "to suspend forcible returns to Libya until the security and human rights situation has improved considerably."

The agency also voiced its concern over the humanitarian situation of some 14,000 of the 37,000 registered refugees and asylum-seekers who have fled the Syrian conflict since the crisis erupted in 2011. Syrian refugees were hit hard by the violence in conflict zones and they have not had easy access to basic human needs. The agency stated that cross-border aid convoys were delivered to some 19,000 displaced people in the period of August to September.

Meanwhile, Tripoli's main working airport was closed down due to armed clashes that broke out in the capital city, as reported by Reuters. Mitiga Airport, which has been operating as the capital's main airport since fighting in the summer damaged and resulted in the closure of Tripoli International Airport, was also recently closed due to the security situation. Tripoli has also suffered from the escalating violence due to increasing clashes between rogue brigades fighting for control of Tripoli International Airport, that led to an all-out battle for control of the entire capital. The two main armed militias, Zintanis and Misratans, have been fighting in order to seize control of key installations, especially the international airport, a top target for both brigades. The airport is of crucial importance due to the fact that it allows the militia groups to easily access the center of Tripoli, which means greater control over the capital city.

Libya has been suffering from growing instability as heavy clashes further polarize the country. Since the ouster of long-ruling dictator Moammar Qadhafi, the Libyan government has long been at the mercy of rogue brigades as the central government has not had enough power to re-gain control over its territory.