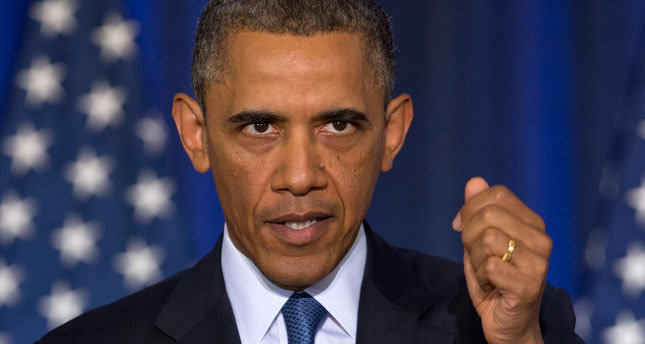 by daily sabah
Nov 19, 2014 12:00 am
U.S. President Barack Obama said, "Certainly no changes have taken place with respect to our attitude towards Bashar al-Assad," although CNN last week reported that he told his advisers to review the policy on Syria after realizing that the Islamic State of Iraq and al-Sham (ISIS) cannot be defeated as long as Syrian President Bashar Assad remains in power.

Speaking at a press conference in Brisbane, Australia where the G20 Leaders' Summit was held, in response to a question regarding U.S. policy on Syria, Obama said, "For us to then make common cause with him against ISIS would only turn more Sunnis in Syria in the direction of supporting ISIS, and would weaken our coalition that sends a message around the region this is not a fight against Sunni Islam, this is a fight against extremists of any stripe who are willing to behead innocent people or kill children, or mow down political prisoners with the kind of wanton cruelty that I think we've very rarely seen in the modern age."

He said the U.S. communicated with the Syrian regime although he said had Assad lost his legitimacy. In order to justify the communication with the regime, Mr. Obama said, "We have communicated to the Syrian regime that when we operate, going after ISIS in their air space, that they would be well advised not to take us on. … Beyond that, there's no expectation that we are in some ways going to enter an alliance with Assad. He is not credible in that country."

He also defined the red-line of the U.S. to send troops on the ground: "If we discover that ISIS had gotten possession of a nuclear weapon and we had to run an operation to get it out of their hands, then yes, you can anticipate that not only would Chairman [Martin] Dempsey recommend sending U.S. ground troops to get that weapon out of their hands, but I would order it." However, in 2012 Obama similarly said the red-line for militarily backing of Assad's removal was the use of chemical weapons. Although hundreds of Syrian had been subjected to chemical attacks, the Obama administration refrained from taking a step to topple the Syrian president.

U.S. Secretary of State John Kerry also commented on ISIS and the Syrian regime: "Assad and ISIS are symbiotic. ISIS presents itself as the only alternative to Assad. Assad purports to be the last line of defense against ISIS. Both are stronger as a result," he said. Kerry made his remarks at the Transformational Trends Strategic Forum organized by the Washington-based Foreign Policy Group and the U.S. State Department.