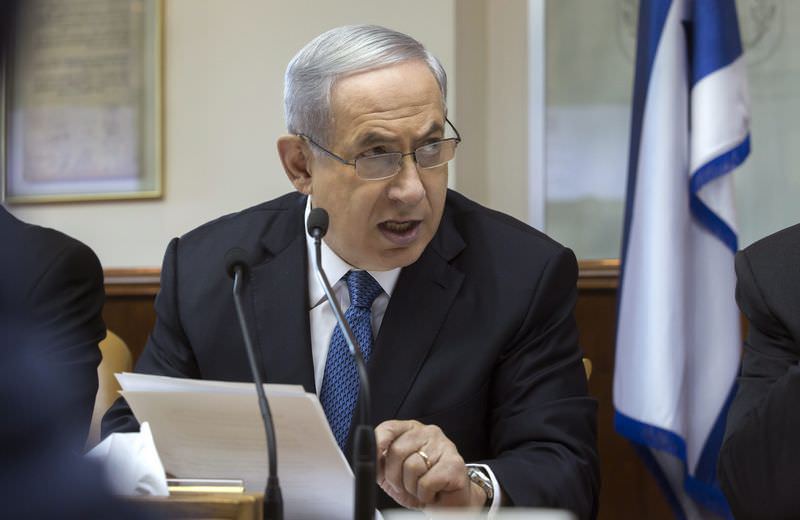 by daily sabah
Nov 24, 2014 12:00 am
Amid growing international pressure on Israel to implement a two-state solution to end the Israeli-Palestinian conflict, the Israeli cabinet on Sunday approved a new bill introduced by Israeli Prime Minister Benjamin Netanyahu to make the country the national home of the Jewish people, excluding the Palestinian community that makes up around 20 percent of Israel's population. The latest Israeli move is more fuel for those who claim that Israel has no intention of joining a two-state solution and would instead be preferred to be seen as a nation-state of the Jewish people. A peace between Israel and Palestine would be significantly harder to achieve if the bill is approved by the Knesset (Israeli parliament) on Wednesday and becomes law.

Reiterating the definition of Israel as the national homeland of the Jewish people, Netanyahu said, "The Palestinians refuse to recognize this, and there is also opposition from within – there are those who want to establish autonomy in the Galilee and the Negev, and who deny our national rights," Israeli prime minister said. "I also don't understand those who call for two states for two peoples, but at the same time oppose anchoring that in law. They are quick to recognize a Palestinian national home, but adamantly oppose a Jewish national home," he added, referring to the increasing pressure from European countries to make Israel accept a two-state solution.

The bill has received severe criticism from members of the Israeli parliament, mostly coming from the center and the left, as they fear that the law would only "institutionalize discrimination" against Palestinians. The further elimination of democracy in the Israeli state could lead to the Palestinian community facing growing discrimination.

A two-state solution for Israelis and Palestinians has long been on the agenda of the U.N. and EU. In response to Israel's reluctant commitment to the two-state solution to solve the long-lasting Israeli-Palestinian conflict, many EU countries, including Britain, Sweden, Ireland and Spain, gave a symbolic and non-binding vote on the recognition of Palestinian statehood. However, after the Jewish state bill, peace negotiations would be hard to be maintained on stable ground as it would flare up more tension between the two communities
Last Update: Nov 24, 2014 2:41 pm