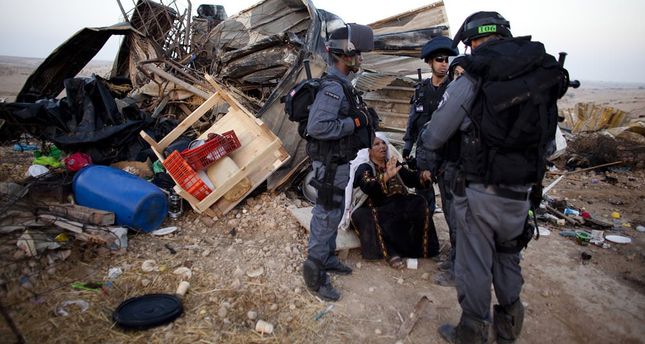 by Daily Sabah Nov 25, 2014 12:00 am
The Palestinian Bedouin community has been facing a grave threat posed by Israeli authorities to remove them to designated towns as the Jewish East-1 (E-1) resettlement plan in the area has been enacted.

"We heard that the Israelis would bring thousands of outsiders into this land, which would mean forced displacement for us. All the Jewish settlements around will be combined and united with Jerusalem," Abu Raed, the leader of the Palestinian Bedouin community told Anadolu Agency (AA) while calling the Israeli resettlement plan "the worst threat we have ever faced." He also underscored that a possible eviction to an urban township would bring an end to their nomadic lifestyle.

The forced displacement of Palestinians from their homes and land received severe criticism from European countries last year – primarily from the U.K. A letter condemning the Israeli resettlement plan was published in the British newspaper The Guardian calling the Israeli plan "ethnic cleansing."

The Israeli building program known as E-1 situated between Jerusalem and Maale Adumim, has long been on the Israeli agenda. After long periods in which Israel almost completely froze the program, Israeli authorities announced to renew the construction program in November 2012. Since then, nine plans of resettlement of rural Bedouin communities from the E-1 zone on the outskirts of Jerusalem to a new town in the Jordan Valley were enacted by Israel in order to ensure territorial contiguity between the city and the Jewish settlement of Maale Adummim. According to a study conducted by the U.N. Relief and Works Agency for Palestine Refugees in the Near East (UNRWA), since 1997 around 150 Bedouin families have been forced out of their homes in the Jerusalem district. Amnesty International, among other organizations also underscored that the forced eviction of Bedouin communities could legally be considered a war crime.