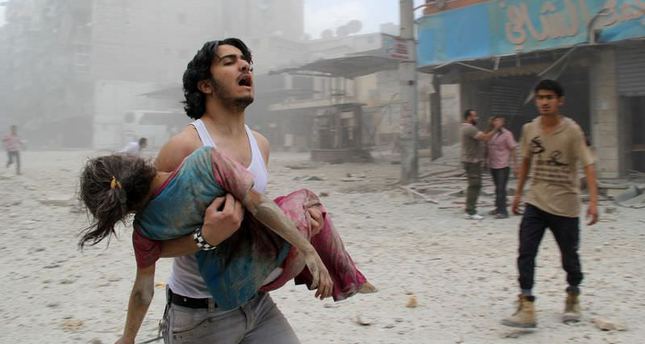 While the world’s eyes have turned to the Kurdish town of Kobani, Syrian regime forces continue to launch airstrikes on Syrians, mostly civilians. At least 100 people died in the latest regime attacks

While the world is focused on the activities of the self-proclaimed Islamic State of Iraq and al-Sham (ISIS) militants in Iraq and northern Syria, Syrian regime forces continue to pursue their war on opposition groups and launch airstrikes on rebel-held areas regardless of the identity of the victims.

Yet the regime of Syrian President Bashar al-Assad is not under so much scrutiny despite ongoing civilian deaths. In the regime's latest aerial attacks at least 100 people died and 120 injured in Raqqa, a stronghold for the ISIS militants. Syrian air forces carried out at least 10 airstrikes in Raqqa, targeting the city's al-Hani Mosque and the public market.

Although the regime forces claimed the attack targeted the militants, Britain-based Syrian Observatory Group for Human Right, which monitors the war and reports from the country, said more than 50 of the killed people were unarmed civilians. "Some of the strikes hit near to ISIS posts," said Rami Abdel Rahman, director of the Britain-based Observatory.

In several statements, made by the U.S. officials, the White House has declared the eradication of ISIS from the region as its ultimate target, made it clear that it has no aim of toppling the Syrian regime. On the contrary, according to the mainstream Syrian opposition, the coalition members' airstrikes are opening a space for the regime to intensify its attacks.

The local sources underscored that the air raids launched by the regime, which also include dropping barrel bombs, have killed dozens of Syrians since the U.S.-led anti-ISIS coalition started pounding ISIS in Syria. A Free Syrian Army member told Daily Sabah, "The coalition suffers from the lack of cooperation on the ground. Their officials also voiced this deficiency. We are saying that we can help you against ISIS since the group turns its weapons on us on every occasion. However, we also demand help against the regime that has killed hundreds of thousands of people in this country since the war started." He added, "Our people do not believe in the sincerity of this coalition and cannot understand how ISIS became the main target while the regime was destroying the country."

Local sources also underscored the fact that coalition attacks on ISIS are not working since the group continues advancing in some areas or at least continues to hold their positions. For instance, coalition forces have conducted the most intense strikes on ISIS positions in Kobani over the last weeks.

Russia which is one of main supporters of the Syrian regime, has invited Syrian Foreign Minister Walid al-Moualem to visit this week after a similar trip by a former Syrian opposition chief earlier this month.

"It is important that constructive Syrian opposition forces restart political dialogue with official (representatives of) Damascus in the face of dangerous challenges posed by international terrorism," Russia's Deputy Foreign Minister Mikhail Bogdanov said on Monday according to agency Interfax. A statement by the Russian Foreign Ministry announcing the Moualem visit said the two ministers would hold talks "against the background of U.S. attempts to monopolize the right to decide on the goals and methods of anti-terrorist operations." Yet the talks are unlikely to be fruitful as the Moscow administration rejects the departure of Assad and does not offer a concrete solution for the country.

While the international and regional powers continue endless discussions, the regime does not only use conventional weapons but also chemical weapons. The Hague-based Organization for the Prohibition of Chemical Weapons (OPWC) says it has evidence of the use of chlorine gas in repeated attacks by regime forces in Syria. The OPWC said there had been a "spate of new allegations" of chlorine attacks. The regime agreed to destroy its chemical weapons a year ago following global outrage over a sarin gas attack in Ghouta, a suburb of Damascus, in August 2013 that killed hundreds – the worst attack of its kind for quarter of a century.

However, opposition groups claim the regime has not handed over all of its chemical stockpile and still uses chemical weapons against its people. Although the U.S. and other Western countries had attempted to prevent the regime from using chemical weapons last year and even considered military intervention, ISIS has changed the balances in the war, seemingly removing the option of military intervention in Syria.