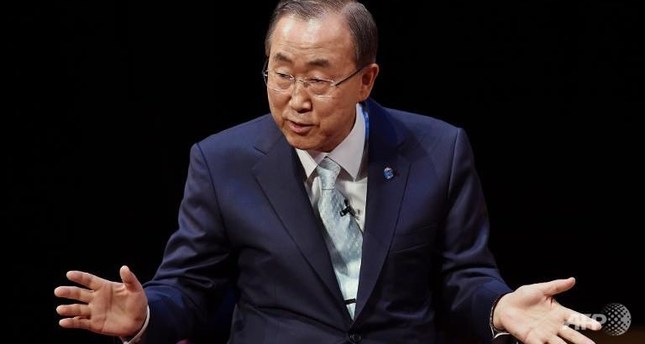 by Associated Press
Nov 26, 2014 12:00 am
Secretary-General Ban Ki-moon said Monday the international community's failure to advance a political solution to the Israeli-Palestinian conflict is spurring governments and parliaments to take action to recognize the state of Palestine and "that momentum will grow." The U.N. chief said at the U.N. commemoration of the International Day of Solidarity with the Palestinian People that the international community must assume "a collective failure" for not being able to get a peace deal. "Indeed as we see around the world governments and parliaments are taking action," Ban said.

Palestinian President Mahmoud Abbas, in a statement read at the commemoration, welcomed changes in popular sentiment in the West that have reached "official political levels," starting with Sweden's recognition of the state of Palestine and the overwhelming motions supporting recognition by parliaments in Britain, Ireland and Spain. He said these actions, and upcoming votes in France and other European countries, are "positive developments which enhance the opportunities for peace and security and stability in the region." "Does Israel, the occupying power, understand all of the messages in this regard?," Abbas asked.

Israel's U.N. Ambassador Ron Prosor told the General Assembly later Monday that Sweden and European parliaments supporting recognition of a Palestinians are taking away any incentive for the Palestinians to negotiate, compromise or renounce violence and are giving them exactly what they want "statehood without peace." Secretary-General Ban warned that incitement and provocative acts at the holy sites in Jerusalem "are fanning the flames of conflict far beyond the holy city." "Extremists on both sides are dictating the agenda," Ban said. "I call on the parties to step back from the brink and find the path of peace before hope and time run out."

Much of the recent violence has stemmed from tensions surrounding Jerusalem's hilltop complex that is revered by Muslims and Jews. The collapse of U.S.-brokered peace talks, Israel's war last summer in the Gaza Strip against the Islamic militant group Hamas, and continued Israeli settlement construction in east Jerusalem have added to Israeli-Palestinian distrust.

Abbas accused Israel of trying to alter or erase the Palestinian and Christian and Muslim presence in Jerusalem and of taking measures aimed at turning East Jerusalem, which the Palestinians want as the capital of their future state, into a Jewish area. Prosor accused Abbas of inciting violence against Jews at the Jerusalem hilltop complex. He said Israel "will make sure that the holy places remain open to all people of all faiths for all time." Abbas reiterated that the Palestinians are seeking a U.N. Security Council resolution that would set November 2016 as the deadline for Israeli troops to withdraw from all Palestinian territory. Palestinian U.N. Ambassador Riyad Mansour indicated there will not be a vote in November.