Putin praises Turkey on not giving up on its own interests 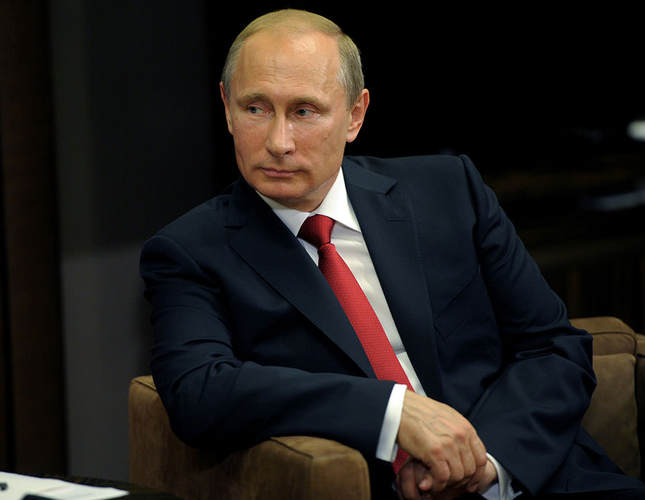 by AA
Nov 28, 2014 12:00 am
Russian President Vladimir Putin said Turkey had been finding new ways to boost trade between the two countries, in an interview with The Anadolu Agency.

Putin praised Turkey's independent decision-making, and said Russia could increase its trade in foodstuffs with the country. Putin also proposed new collaboration opportunities in industry, specifically in the aerospace sector.

Putin spoke ahead of his visit to Turkey scheduled on December 1st to attend the fifth session of the High-Level Russian-Turkish Cooperation Council.

The questions and replies by Putin in the interview are as follows:

Anadolu Agency: What specific objectives in political, economic and cultural spheres of Russian-Turkish relations will you set during the meeting of the High-Level Cooperation Council? Why do the bilateral relations remain generally warm despite political differences in some regional issues?

President Putin: The upcoming state visit to Turkey and participation in the fifth session of the High-Level Russian-Turkish Cooperation Council are an important stage in advancing relations between our states. Due to the common efforts we have take nook in recent years, our relations have been developing constructively on the basis of mutual confidence, good neighborliness, equality and mutual respect of interests.

Together with the President of Turkey, Recep Tayyip Erdoğan, we are going to discuss the main issues of Russian-Turkish cooperation, including the implementation of strategic joint projects in the energy sector. We are going to review the results of our cooperation over the last year and outline future tasks. And of course, we will exchange views on key international and regional problems.

Turkey has been and remains an important foreign trade partner for Russia. In 2013, our bilateral trade turnover reached $32.7 billion. The accumulated Russian direct investments in Turkey exceed $1.7 billion, and similar Turkish investments in Russia are close to $1 billion. We are both interested in maintaining this positive trend.

Our agenda includes the improvement of trade turnover structure through increasing the share of high-tech products and developing industrial cooperation. In this regard, we are already implementing a number of important joint projects. For example, the Magnitogorsk Iron and Steel Works has upgraded and expanded the capacity of the Iskenderun Iron and Steel Works Company, with investments amounting to $2 billion. The Russian GAZ Group and the Turkish company Mersa Otomotiv have launched a car assembly plant in the province of Sakarya.

One of the promising areas is cooperation between our countries in space exploration. On February 15, 2014, a Turkish telecommunication satellite Turksat4A was successfully launched using a Russian carrier rocket. Next year, we plan to launch a second satellite, Turksat4B.

I would also like to note that about 100 Turkish construction companies are now working in Russia. Some of them participated in building the infrastructure for the Olympic Games in Sochi. We expect that this experience will be successfully applied in the future when constructing the facilities for major international sporting events to be held in Russia in the coming years.

Bilateral ties in the humanitarian field are actively developing. In February 2014, the Russian Centre for Science and Culture opened in Ankara. In Moscow, it is planned to open the Yunus Emre Turkish Cultural Centre, named in honor of a prominent Turkish poet of the 13th-14th centuries.

Over the recent decades, Turkey has been one of the countries most visited by Russian tourists. This is greatly facilitated by a visa-free regime for short-term trips. Around 4.3 million Russians visited Turkey in 2013, while the number of visitors in January-September of this year already reached 4.1 million people. We expect that the announcement of reciprocal years of tourism in our countries will allow us to significantly increase the flow of tourists, and for our part, we will always be glad to welcome Turkish guests.

Due to such intensive multidimensional ties, Turkish-Russian relations remain stable, not depending on the current situation and maintaining continuity. Naturally, our positions on some issues might not be exactly the same or may even differ. This is natural for states carrying out independent foreign policy. At the same time and above all, we understand the importance of partnership between our countries and our peoples and a common desire to continue the mutually beneficial dialogue, which is highly appreciated by Russia.

AA: Turkey is preparing for the winter season, as far as natural gas consumption is concerned. What are your plans regarding the increase in gas supplies to Turkey and the revision of gas prices? What is the scope of Russia's plans to expand energy cooperation with Turkey in general and in the field of peaceful use of nuclear energy in particular?

Putin: Over the last decades, energy has been playing the role of a 'locomotive' in our trade and economic cooperation. In terms of volume, Turkey is the second largest buyer of Russian natural gas after Germany, which is delivered through the 'Western corridor' with transit through Ukraine, Moldova, Romania and Bulgaria, and through the Blue Stream gas pipeline. Last year, Russian gas supplies to Turkey reached 26.6 billion cubic meters, and this year, most likely, will probably exceed this amount.

We have a clear understanding of how important Russian energy resources are for Turkey's socioeconomic development. That is why we always respond positively to any appeals regarding Russian natural gas exports. In October, we reached an agreement in principle on increasing the annual supply through the Blue Stream pipeline from 16 to 19 billion cubic meters and on the engineering works that thus need to be done. Our experts keep a close check on this matter.

As regards the pricing for extra gas volumes, this issue needs to be thoroughly analyzed by the companies concerned, including in view of the situation on the Turkish natural gas market.

As far as diversification of our economic partnership with Turkey is concerned, we intend to identify strategic areas for our cooperation, including high technologies, together. Nuclear energy is among such areas. In December 2010, an intergovernmental agreement on cooperation in construction and operation of nuclear power plant at Akkuyu in Turkey was signed. This large-scale project, worth about $20 billion, is being implemented on schedule and will strengthen Turkey's energy security and create new jobs, including through the involvement of Turkish companies.

As a matter of fact, a whole new promising industry is being created in your country and we are helping you train highly skilled specialists for it. Since 2011, four groups totaling more than 250 students have been sent from Turkey to Russia for training.

AA: What possibilities do you in Russia see for increasing trade between our two countries and what figures can be achieved?

Putin: We highly value independent decisions by Turkey, including on economic cooperation with Russia. Our Turkish partners refused to sacrifice their interests for somebody else's political ambitions. I consider that to be a really well-weighed and far-sighted policy.

The position of your government opens up new opportunities for increasing bilateral trade. First of all, it allows the Turkish farmers to fill in the emerging niches on Russia's huge food market. We welcome their intentions to export more meat, dairy and fish products, vegetables, and fruits to Russia.

Hopefully, together we will be able to increase our mutual trade and enhance the quality of investment cooperation for the benefit of the peoples of Russia and Turkey. We have already agreed with Mr. Recep Tayyip Erdoğan that we can bring our mutual trade up to $100 billion (in 2013, it amounted to $32.7 billion).

I would like to note that unilateral restrictive measures imposed on our country by the United States, EU, Japan, Australia, and a number of other states are not legitimate. Such pressure not only causes direct economic damage, but also threatens international stability.

Attempts to use the language of ultimatums and sanctions in talks with Russia are absolutely inadmissible and have no chance for success. In such case, our response has always been and will be balanced and consistent with Russia's rights and commitments under international treaties, including the WTO agreements.

By the way, heads of leading western companies operating in Russia express their concerns over the sanctions and reaffirm their willingness to continue cooperation with their Russian partners.

We hope that common sense will prevail. We call to abandon the distorted logic of restrictions and threats and to search for mutually acceptable solutions to outstanding issues.

AA: How do you assess the current state of affairs in Syria? Does Russia have any suggestions on how to speed up the settlement process in that country?

Putin: The situation in Syria remains source of serious concern. And we are fully aware of the burden imposed on Turkey by the on-going violent conflict ravaging your neighbors. What is more, the main risk of further aggravation of the situation both in this country and in neighboring states stems from the activities of the so-called Islamic State and other radical groups that were once actively employed by some Western countries, which flirted with them and encouraged them.

We consider the fight against terrorists and extremists in the Middle East and North Africa, including naturally Syria, a region struck by upheavals, a priority task for the international community. We are convinced that the efforts to deter this threat should be based on the UN Security Council resolutions, strict compliance with international law, the principles of state sovereignty and non-interference in internal affairs of states in the first place. And what is important - this should be done transparently and without any hidden agenda.

We, for our part, will further support governments of Syria, Iraq and other regional states in countering extremists. On the whole, we believe it is important to address numerous regional problems comprehensively, based on an in-depth analysis of threats existing in the Middle East and North African region in all their complexity. It is evident, for example, that the protracted Arab-Israeli conflict and the failure to settle the Palestinian problem are being employed by extremists in order to recruit new supporters, especially among young people.

From the very onset of the Syrian crisis Russian has consistently exerted efforts towards its peaceful political settlement by the Syrians themselves based on the Geneva Communiqué of June 30, 2012, meaning through internal dialogue without any preconditions or dictates from the outside.

We believe that the rise of terrorist groups in Syria and in the Middle East in general require consolidation of all robust forces of Syrian society-consolidation for the future of Syria as a sovereign, united, secular and democratic state where equal rights for all ethnic and confessional groups are guaranteed and everyone can enjoy peace and security.

We will continue to do everything necessary to help the Syrian people to overcome the tragic events and find peace and harmony as soon as practicably possible. This is the purpose of our contacts with the Syrian government, various opposition groups, our international and regional partners, including, of course, our Turkish colleagues.