Egyptians protest dropping of charges against Mubarak in Tahrir Square 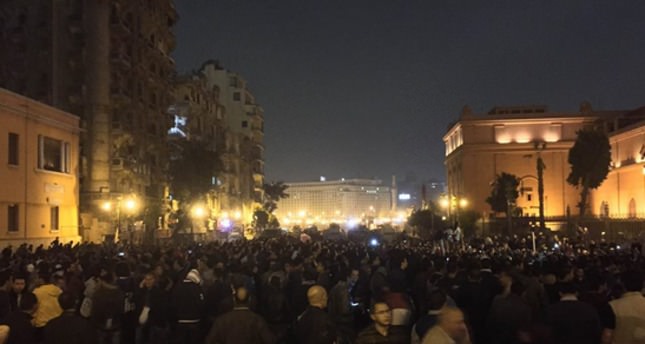 by AA Nov 29, 2014 12:00 am
Hundreds of people on Saturday gathered near central Cairo's Tahrir Square to protest against a court verdict, dropping charges against ex-president Hosni Mubarak that he incited the killing of protesters in 2011.

Standing trial with Mubarak in the same case were his interior minister and several Interior Ministry officials.

They were all accused of killing hundreds of demonstrators during the 2011 revolution that ended Mubarak's autocracy of three decades.

The demonstrators who flocked to Tahrir Square chanted slogans critical of the verdict, Mubarak and his government officials.

When they arrived, however, the demonstrators found the square totally shut down by army troops and policemen who placed armored vehicles and barbed wire to prevent them from entering.

Tahrir Square was the iconic center of the revolution against Mubarak. Among the demonstrators on Saturday were youth groups that participated in the uprising against Mubarak in January of 2011.

The protest was organized by nine political movements and parties.

Protests also erupted in other provinces against the ruling, including in the coastal city of Alexandria and in the Suez Canal province of Ismailia.

Mubarak, his interior minister and the Interior Ministry officials were sentenced to life in prison [25 years] in 2012 on charges of killing demonstrators during the revolution in 2011.

A retrial was, however, scheduled, but the charges were dropped on Saturday, opening the door for mixed reactions from Egyptians. Mubarak's backers cheered the ruling.