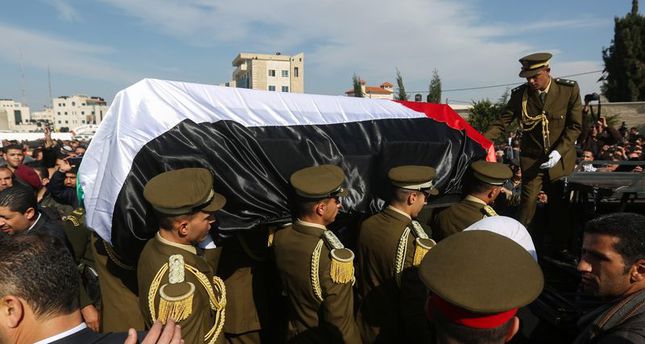 by Daily Sabah Dec 12, 2014 12:00 am
Palestinian minster Ziad Abu Ein died Wednesday after Israeli police grabbed him by the throat on his way to plant olive trees during a peaceful West Bank protest.

Israeli soldiers fired tear gas and sound grenades at protestors and Abu Ein was pushed and grabbed by the neck.

Abu Ein spoke to television reporters before he died and said that the Israel Defense Forces is a terrorist army that exercises its terrorism against the Palestinian people. "We came to plant trees on Palestinian land and they launched an attack on us at the very start. Nobody threw a single stone."

Palestinian President Mahmoud Abbas described the event as "a barbaric act" that Palestinians cannot be silent about or accept and announced three days of national mourning, which concludes today. Fearful of the possible loss of security cooperation with Abbas, Israel issued an apology.

"We are sorry about his death," Defense Minister Moshe Yaalon said in a statement. "Security stability is important for both sides and we will continue coordinating with the Palestinian Authority," Yaalon added.

Losing security collaboration with Abbas would mean another problem for Israel. The country is already tied up in early elections announced by Prime Minister Benjamin Netanyahu to renew his mandate in office, which will take place in March. Several members of his coalition government opposed his Jewish nation-state bill – a bill that would strengthen the Jewish nature of the nation that critics say is undemocratic and would greatly harm the Arab minority in Israel.

Israel's opposition Labor party said on Wednesday that it is joining forces with hope to unseat Netanyahu in the forthcoming elections. Labor leader Isaac Herzog publicized his agreement with former Justice Minister Tzipi Livni, who was fired by the prime minister earlier this month for opposing his pro-settler policies and the breakdown of the peace process with the Palestinians.

Herzog said that if he and Livni successfully formed the next government, they would alternate as prime minister with Herzog taking on the role for the first two years and Livini for the two years after. Even though opinion polls currently give the new union a few more seats than Netanyahu's Likud Party, he could still continue as prime minister by creating an alliance with right-leaning parties in the Knesset.

Meanwhile, as Netanyahu pushes for a nation-state bill, Ireland is considering following in the footsteps of the U.K., France and Spain who passed a motion that calls on their government to follow Sweden and recognize a Palestinian state in an attempt to restart peace talks.

Sweden was the first of the European Union and 135th of the world's 193 nations to recognize Palestine – something no Western country has yet to do.