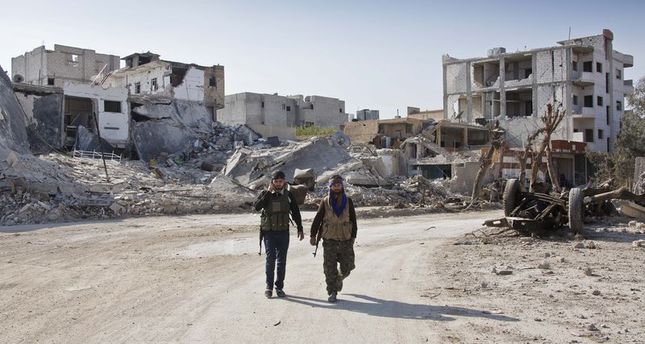 by Dec 31, 2014 12:00 am
Kurdish forces have regained control of around 70 percent of the Syrian town of Kobani near the Turkish border after pushing back ISIS militants that have spent months besieging it, a group monitoring the war said on Wednesday.

Backed by U.S-led air strikes, Kurdish forces made significant advances overnight on Tuesday after violent clashes with ISIS in the south of the town, the British-based Syrian Observatory for Human Rights said.

Known as Ayn al-Arab in Arabic, the town has became a symbol in the fight between the ISIS group and its enemies in Iraq and Syria. Hundreds of ISIS militants launched a sustained attack on the town more than three months ago.

U.S.-led forces have bombed ISIS positions around the predominantly Kurdish town almost every day this month.

The Observatory, which gathers its information from sources in Syria, said Kurdish fighters now control southern and central parts of the town as well as most of the west in an area stretching up to the border.

Rami Abdulrahman, who runs the Observatory, said Kobani was the only clear example of U.S-led forces cooperating with fighters on the ground in Syria to push back ISIS.

He said Kurdish forces were close to controlling all of the town, thanks to the overnight gains in strategic positions.