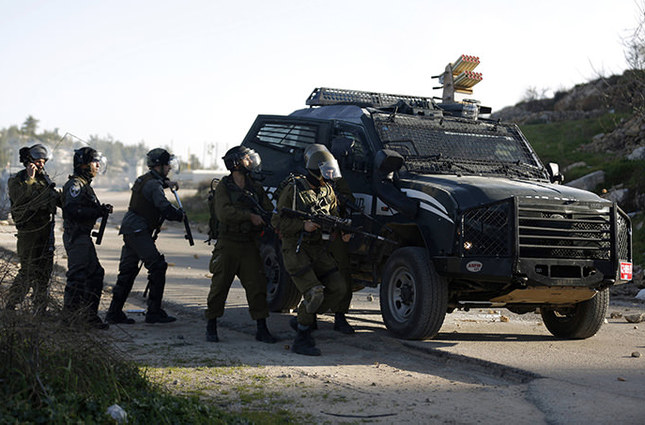 by Anadolu Agency Feb 02, 2015 12:00 am
Israeli bulldozers razed several Palestinian buildings near the West Bank city of Nablus on Monday, an official has said.

"An Israeli army force backed by several bulldozers raided the West bank town of Kasra," Ghassan Daghlas, a Palestinian official in charge of Israeli settlements file in the northern part of the occupied West Bank, told The Anadolu Agency.

"They demolished two storage facilities used by farmers, a water well and a fence, under the pretext of having been built without permit in Area C," Daghlas said.

He also noted that violent clashes had erupted between Israeli troops and residents of Kasra where Palestinian youths hurled rocks at the Israeli troops, who used teargas and rubber bullets, leaving a number Palestinians with temporary asphyxia.

Israeli authorities could not be reached for a comment.

The U.S.-sponsored Oslo Accords, signed between Israel and the Palestinian Authority in 1993 and 1995, divided the West Bank into areas A, B and C.

Israel typically prevents Palestinians in the West Bank's "Area C" from erecting structures in the area on grounds that the land is under Israeli administration.

Area C, which constitutes nearly two thirds of the West Bank's total territory, remains - in line with the terms of the accords - under full Israeli security and civilian control.

Israel occupied East Jerusalem and the West Bank during the 1967 Middle East War. It later annexed the city of Jerusalem in 1980, claiming it as the capital of the self-proclaimed Jewish state in a move never recognized by the international community.
Last Update: Feb 02, 2015 11:25 am
RELATED TOPICS