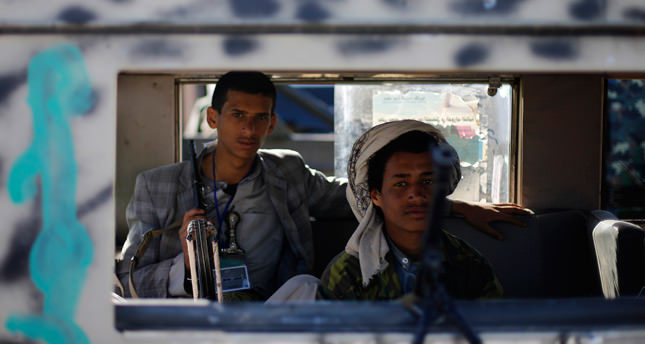 Rebels who control Yemen's capital have given a three-day ultimatum for political forces to fill a power vacuum, otherwise they will take over themselves, they said Sunday. The rebels, known as Houthis, announced the decision on their al-Masirah television station, as the final statement from a political summit they have been holding in a sports stadium since Friday to organize "a peaceful transfer of power." Impoverished Yemen, home to a formidable al-Qaida affiliate, has been leaderless since Abed Rabbo Mansour Hadi resigned the presidency last month after the Houthis pressured him for a greater share of power and besieged his home. A day earlier, an official close to Hadi said he would not reconsider his resignation, despite pressure for him to do so by the Houthis, who he said are holding him "at gunpoint." They have kept him under de facto house arrest since earlier this month. The Houthis control all major government buildings in Sanaa, as well as a number of key military facilities including the headquarters of the paramilitary Special Forces and air force.

A main movement representing southerners has already withdrawn from a U.N. sponsored dialogue with the Houthis, calling them 'absurd' and demanding that the rebels release Hadi and allow the country's parliament to convene normally. Later in the day, armed Houthis broke up a protest against them at the city's main university, detaining several people. They hold around a dozen activists in the capital, after releasing some two dozen others in recent days. In the southern city of Ibb, witnesses said two men on a motorcycle shot dead a Houthi leader, Abdullah al-Ayani. They declined to give their names for fear of retribution. The governor of the southern port city of Aden said in a statement that he rejected any calls for separatism or sectarianism.

Yemen's president will not reconsider his resignation, despite pressure for him to do so by rebels who control the capital and who he says are holding him "at gunpoint," an official close to him said Saturday. The refusal comes after representatives from Yemeni political parties met Abed Rabbo Mansour Hadi at his home, where the rebels continue to hold him under house arrest and are searching all visitors.

The official, speaking on condition of anonymity because he was not authorized to speak to reporters, said Hadi was willing to participate in a national dialogue session, provided that it took place outside the rebel-controlled capital. He said Hadi proposed the southern city of Taiz as an alternate venue.

Later in the day, a U.S. drone strike hit a car in Shabwa province, killing four suspected al-Qaida operatives, Yemeni tribal and security officials said. A similar strike targeted the group last Monday, signaling Washington's determination to keep fighting the militants despite political paralysis brought on by a power grab by Shiite rebels. The officials did not give the nationalities of the men killed. They spoke on condition of anonymity because they were not authorized to release the information otherwise.

Also Saturday, hundreds of anti-Houthi protesters formed a human chain in the city of Dhamar that was later broken up by rebels who fired automatic rifles into the air. In a statement, the demonstrators demanded a halt to all dialogue with the Houthis until they disarm and release detained activists.

Military officials said the Houthis still control most of the capital's military installations and arms depots, and have at their disposal heavy weapons including hundreds of T-72 tanks, self-propelled artillery and Katyusha rocket launchers. The Houthis also recently captured a Republican Guard camp outside Sanaa which had been used by American experts until 2012 to train local forces battling Yemen's al-Qaida's affiliate, which Washington considers to be its most dangerous branch. The military officials spoke on condition of anonymity because they were not authorized to speak to the press.

Since the Houthis escalated their conflict with the embattled central government in January, demonstrators have taken to the streets in several cities to protest their power grab. Yemen's Shiite rebels who overran the capital, Sanaa, are demanding their militia becomes part of the country's army and police force as a precondition for talks on releasing the nation's president and Cabinet members from house arrest, a senior politician said Monday. The demand is the latest in the power grab by the Houthi rebels who last month raided the presidential palace, months after taking over key state institutions and military facilities after descending from their northern stronghold into Sanaa in September.

On Monday, Abdullah Noaman told The Associated Press that his Nasserite Party pulled out of U.N.-brokered talks the day before, after the Houthis demanded that their 20,000-strong militia join the country's military and security forces as a precondition to any kind of deal. He accused Houthis of using the talks as "political cover to complete their coup." On Sunday, the Houthis gave Yemen's political factions a three-day ultimatum to reach an agreement. Otherwise they said they'll take over themselves.