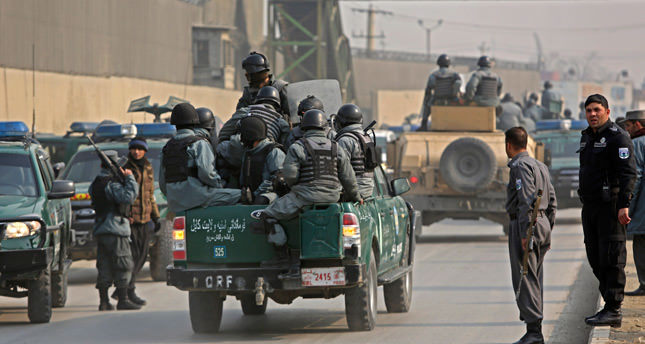 by Anadolu Agency Feb 03, 2015 12:00 am
Two police officers in Afghanistan have killed up to seven of their colleagues and defected to the Taliban. The attackers took weapons and ammunition from their colleagues after the attack in southern Kandahar province. The provincial governor's spokesman Samim Khepelwak confirmed the incident and said a delegation was sent to the area for further investigation. "Initial reports confirm that two policemen have killed four of their colleagues in Maiwand district. We have got reports of higher casualties. Further investigation is underway to find out the number of martyrs," Khepelwak told Anadolu Agency.

An Afghan police officer from the district also confirmed to AA, on condition of anonymity, that two policemen shot and beheaded their colleagues in a remote post. Taliban spokesman Qari Yosuf Ahmadi claimed responsibility for the incident saying that it was a technical operation by their trained members. "The two of our colleagues who had assassinated seven policemen are with us now and they have brought nine AK-47s with some ammunition," Ahmadi said. Four policemen were killed and three others wounded overnight when Talban militants carried out an attack on their post in the Chesht Sharif district of western Herat province. "A group of Taliban has attacked the post and they are behind the killing of four policemen," district police chief Ghulam Rasoul said. He added that one policeman was missing and all weapons and ammunitions were taken by the militants. "The missing soldier may have assisted Taliban," he added.

The so-called insider attacks, known as Blue-on-Green attacks, in which Afghan forces or gunmen in military uniforms turn their weapons on colleagues or NATO troops, have increased in Afghanistan and have worn away trust between Afghan and NATO-led forces. In the latest incident three U.S. contractors and one Afghan were killed by an Afghan soldier at Kabul's military airport on Jan. 30.

Similarly, on Aug. 2014, seven policemen were killed when their colleague turned his weapon on them at a post in Tarin Kut, the provincial capital of southern Uruzgan province. The Taliban has intensified attacks over the past couple of months as Afghan forces assumed full security responsibility in the country after the withdrawal from NATO-led troops. The NATO-led International Security Assistance Force ended its 13-year combat mission in Afghanistan on Dec. 31 2014. From Jan. 1, 2015, the mission evolved into training and advising the nascent Afghan security forces. The 13,000 foreign troops for the Resolute Support Mission will come from 28 NATO allies and 14 other partner nations.