Quartet’s Blair in Gaza Strip for a brief visit 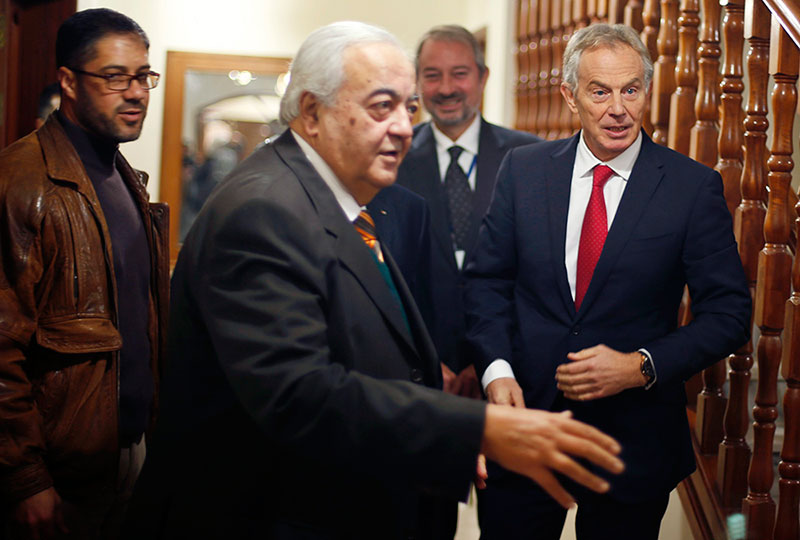 by Anadolu Agency
Feb 15, 2015 12:00 am
Middle East Quartet head Tony Blair arrived in the Gaza Strip on Sunday morning on a brief visit to the Palestinian enclave, a Palestinian official said on Sunday.

Blair arrived in Gaza through the Erez crossing between Israel and the Palestinian strip to get acquainted with the destruction caused by the recent Israeli onslaught in the enclave, Maher Abu Sabha, head of the Palestinian border authority, told The Anadolu Agency. Blair's visit, however, did not last long. He left Gaza in the afternoon.

During his visit, Blair held talks with members of the Palestinian unity government in the Gaza Strip and took a brief tour of the residential areas devastated by last summer's Israeli onslaught, the Palestinian official said.

The visit came as part of a regional tour by the former U.K. premier, which also included Egypt and Israel, with the stated aim of learning about the latest developments in the region.

At least 2,160 Palestinians were killed - mostly civilians - and some 11,000 injured when Israel waged a 51-day offensive against the coastal strip last July and August. Following days of indirect talks, Palestinian and Israeli negotiators hammered out a temporary cease-fire deal on August 26.

Negotiations between the two sides, however, have yet to resume.