Tens of thousands of Israelis rally against Netanyahu in Tel Aviv 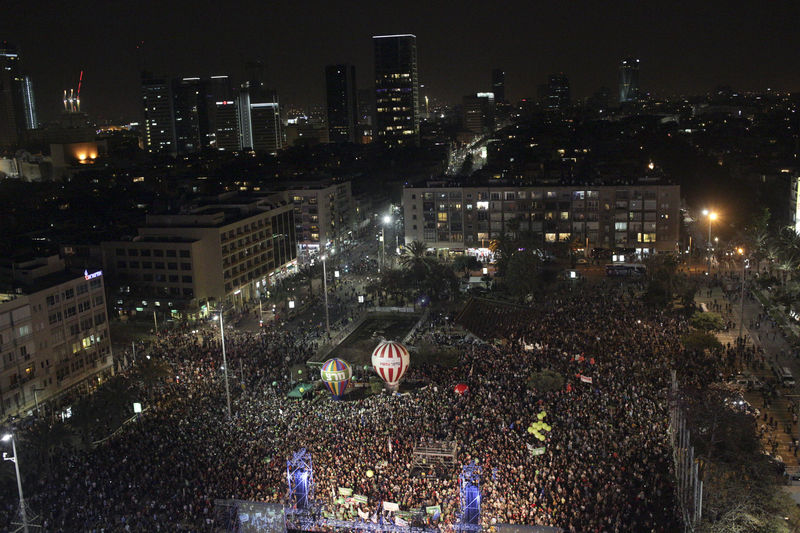 by Daily Sabah with Agencies Mar 07, 2015 12:00 am
Tens of thousands of Israelis are gathering at a Tel Aviv square under the banner "Israel wants change" and calling for Prime Minister Benjamin Netanyahu to be replaced in March 17 national elections.

Saturday night's rally at Rabin Square is the highest profile demonstration yet in the run-up to the election. It is organized by a non-profit organization seeking to change Israel's priorities and refocus on health, education, housing and the country's cost of living. Though not officially endorsed by any political party, it drew mostly supporters of leftist and center parties.

The rally's keynote speaker is former Mossad chief Meir Dagan who recently slammed Netanyahu's conduct and called him "the person who has caused the greatest strategic damage to Israel."

According to Hareetz's report, Dagan criticized harshly Netanyahu, saying "As someone who has served the country for 45 years in security posts, including during some of its hardest hours, I feel we are at a critical period for our future and security,"

"I have no personal interest in the prime minister, his wife, his expenses and his way of life. I am talking about the policy he leads. It is a destructive policy for the future and security of Israel." Dagan said.

Netanyahu came under strong criticism by some groups in Israel for his controversial Congress speech in U.S. last week, in which he urged U.S. lawmakers to reject a proposed deal with Iran over the latter's nuclear energy program.

Republicans, who control Congress, had invited Netanyahu to speak without consulting President Barack Obama or other leading Democrats. As many as 60 of the 232 Democratic members of Congress boycotted the address.

Netanyahu rejected Obama's charges that his speech had offered "no viable alternatives" to an international deal being worked out with Tehran, saying he had presented a practical alternative in Washington to a "deeply flawed" nuclear accord being negotiated with Iran.