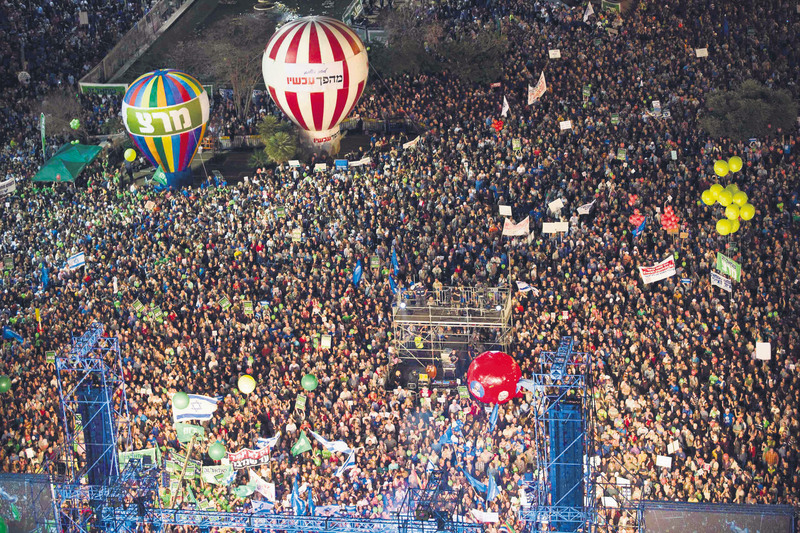 As many as 30,000 Israelis attended a rally to demand government change, while a former chief of the Mossad spy agency slammed Israeli PM Netanyahu over attacks on Gaza and his speech to the U.S. Congress

Thousands of Israelis staged a protest on Saturday - the largest in capital Tel Aviv in months - to demand a change of government. The rally that drew 30,000 Israelis was held on Rabin Square in central Tel Aviv, while participants raised the Israeli flag high. In the middle of a stage placed at the center of the rally, a major banner featured the phrase "Israel wants change on March 17." The rally came only ten days before Israel holds snap general elections on March 17.

Participating in the rally was a large number of members of the leftist Meretz Party, which lobbies for peace between the Palestinians and the Israelis. Thousands of Israelis participated in the rally, according to Israeli newspaper Haaretz. The leftist Peace Now movement, which invited Israelis for the rally, said on Facebook that incumbent Prime Minister Benjamin Netanyahu had failed after six years in office. The movement added that after six years in office, Netanyahu had proved a failure and conditions worsened as Israelis continued to suffer rising commodity and housing prices. It said security and stability were nowhere to be found in Israel, which also suffered conflicts both at the domestic and international levels. Israeli police closed off roads surrounding Rabin Square.

During the rally a former chief of Israel's Mossad spy agency said that the Israeli attacks on Gaza had come to an end without any achievements. Meir Dagan said what happened was just a preparation for the next war. Dagan lashed out at Netanyahu for failing to make peace with the Palestinians. He said he did not want Israel to turn into an "apartheid state" or be held hostage by fear.

He also rejected claims made by Netanyahu in his contentious address to Congress about Iran's nuclear program. In an interview aired on Channel 2 TV, Meir Dagan questioned Netanyahu's claim that the deal under negotiation with world powers would allow Iran to create a nuclear weapon within a year or less. "The time is longer than what he describes," Dagan said. Dagan also rejected Netanyahu's assertion that Iran's intercontinental ballistic missile program could allow it to deliver a nuclear arsenal to "every part of the United States." "The missiles cannot reach the U.S.," Dagan said. When asked if Netanyahu does not know that, Dagan replied: "He knows. So what?"

While the Netanyahu administration is being harshly criticized by both the international community and Israeli opposition, it was declared that Israel's top intelligence officer will visit the United States this week, sources with knowledge of the itinerary said; a sign that security cooperation continues despite disputes between the countries' leaders over their strategy over Iran. Major-General Herzi Halevy, commander of Israeli military intelligence, is scheduled to meet U.S. defence officials and attend a pro-Israel fundraising event, the sources said. It is his first U.S. trip since being appointed in September.

The relations between Israel and the U.S. are in an unprecedented era as it has become visible that the two countries are disappointed with some of each other's policies. The rising tensions between the two historically allied leaders, which have surfaced recently, has resulted from a serious of diplomatic confrontations which has contributed to the souring of the relations.
Last Update: Mar 09, 2015 10:14 am
RELATED TOPICS