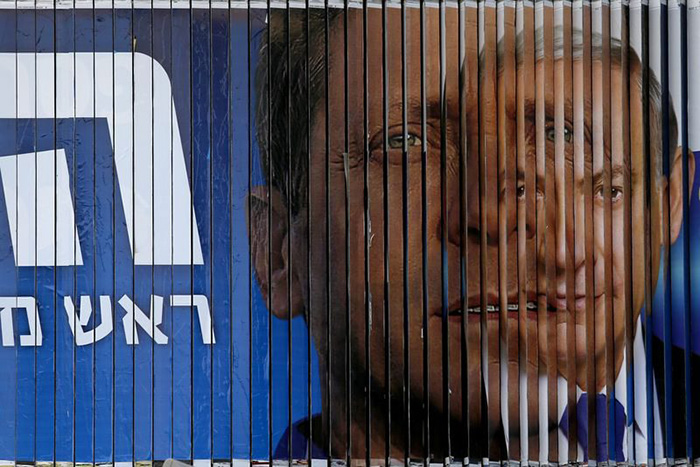 With only a few days left to Israel's general elections on March 17th, public opinion polls suggest that the Zionist Union, led by Isaac Herzog, is becoming more popular among voters, while the Likud Party, led by Israeli Prime Minister Benjamin Netanyahu, has begun to fall behind in the race to form the next government in Israel.

The Zionist Union, the centre-left political alliance in Israel, has 24 Knesset seats, while Netanyahu's Likud party has fallen to 21, according to the public opinion poll conducted by Haaretz released on Wednesday. The poll has suggested that the Joint List will also get 13 seats, making it the third-largest party in the Knesset.

Similarly, a poll conducted by Channel 1 and released on March 12, suggested 25 seats for the Zionist Union, while the Liked only received 22 seats in the Knesset, the Israeli parliament. Numerous other public opinion polls released by the Israeli media only a few days before the general elections have also signaled an erosion of support for the Likud Party and Netanyahu, who is seeking to become prime minister for the fourth term.

The Labor Party, led by Isaac Herzog, and Hatnuah, led by Tzipi Livni agreed on 10 Dec. 2014 to form the Zionist Union. Herzog has suggested that if the Zionist Union is elected, he will pass over the prime ministerial post after two years to Livni, who served as the Israeli Minister of Justice under Prime Minister Benjamin Netanyahu between March 2013 and December 2014.

The poll results indicating a decline in support for Netanyahu reflect criticism coming from his voter base for his hard-line stance in international issues at the expense of providing solutions for the domestic socio-economic problems of Israelis.

Israeli voters blame Netanyahu for focusing on Iran's nuclear threat and other regional issues while neglecting the economic needs of Israelis. In February, Israel's state comptroller issued a report on the rapid rise in house prices. According to the report, the cost of buying a house has risen by over 50 percent in recent years.

Despite Netanyahu's hardliner stance on Iran's nuclear threat and a push for a military confrontation, a new cable by Al-Jazeera's Investigative Unit has revealed that his agenda has been criticized by Israel's national intelligence agency, Mossad. In Mossad's opinion, Iran's nuclear program is not at the level of producing weapons, according to leaks published by Al-Jazeera on March 23. Such difference of opinion between Mossad's assessment of Iran's nuclear program and Netanyahu's presentation at the U.N. in 2012, will also be weighed by the voters, who criticize Netanyahu's hardliner stance which he pushes at the expense of putting forward economic policies that the Israelis have been waiting for.

The voters, as polls suggest, seem to be more concerned with Israel's domestic economic issues, rather than Iran's threat, as they have responded to the centre-left Zionist Union rhetoric that promises focusing on economic issues. Furthermore, the Zionist Union also supports a two-state-solution with the Palestinians and proposes that they will calm worsening relations with the White House that have been at historic low and have "never been worse," as described by the Republican Arizona Senator, John McCain, on February 1 on CNN's "State of the Union" program.

Netanyahu's recent controversial speech at the U.S. Congress has affected his support base according to recent polls. Netanyahu's speech was seen as a breach of diplomatic protocol and harshly criticized by the Obama administration, as his invitation by the House Speaker John Boehner was extended without consulting the White House. Obama rejected attending the Congress meeting, saying that it was not a right decision two weeks ahead of the Israeli elections on March 17. Many Democrat members of Congress also did not approve of Netanyahu's decision and did not attend the speech.

Although previous polls suggested continuing support for the Likud party, the voters have shifted their stance against Netanyahu after the March 3 Congress speech. The voters blame Netanyahu for the rising tension in the rocky relationship between Israel and the U.S., its historically strongest ally.

The rising house prices and the rocky relations with Israel's most important ally are not the only reasons Netanyahu has been losing popularity among the voters. The Israeli PM has also been hit by scandals involving his family members for fraudulent expenditures using state funds. A report released by Joseph Shapira, Israeli Comptroller, has focused on excess spending by the Netanyahu household in various residences. Shapira mentioned in the report that the detailed audit, which has outlined an increased expenditure between 2009 and 2013 on food, hosting, cleaning, gardening and general upkeep, is to be transferred to Yehuda Weinstein, the Attorney General of Israel, since the findings have "raised prima facie (potential) suspicions of ethics violations which could even raise suspicions of criminal acts," Jerusalem Post stated on Feb. 17. Similarly, the 'Bottlegate' scandal that has surfaced in the media accuses Netanyahu's wife, Sara Netanyahu, and possibly others, of allegedly improperly turning in collected deposit bottles, purchased by state funds, in exchange for NIS 4000 cash, likely to affect voter opinion against the Likud Party on March 17.

If the rise in Zionist Union's popularity continues, as the recent polls suggest, Labor Party's Isaac Herzog will be the name to form the coalition, an alliance led by the Labor Party for first time in 16 years. Although Herzog fails to match Netanyahu's political leadership on stage, the voters see him as the only alternative to Netanyahu's failure in domestic politics.
Last Update: Mar 17, 2015 2:33 pm
RELATED TOPICS