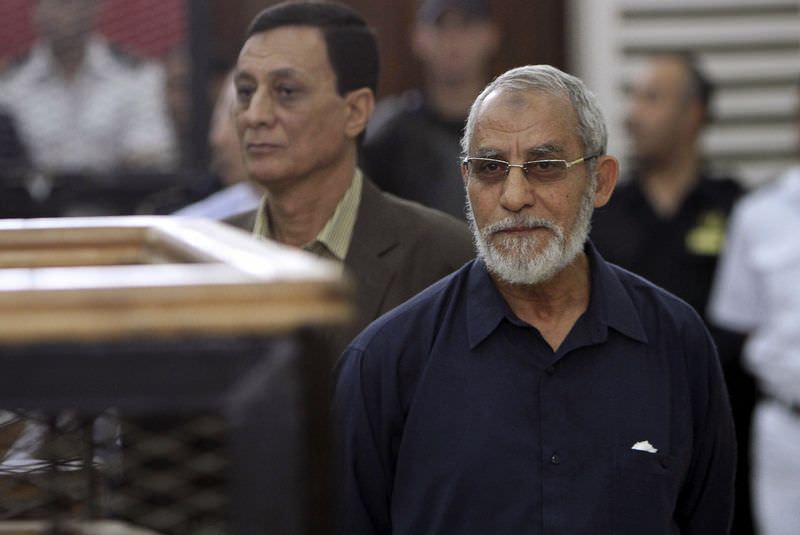 by Anadolu Agency Mar 16, 2015 12:00 am
An Egyptian court on Monday referred 14 Muslim Brotherhood leaders, including group leader Mohamed Badie, to the country's mufti to consider possible death sentences against them for "plotting to sow sedition."

"The court has set April 11 for confirming the verdict," a judicial source told The Anadolu Agency.

The 14 defendants are among 51 people charged with "plotting to sow sedition" during the violent dispersal in mid-2013 of two sit-ins staged by supporters of ousted President Mohamed Morsi.

The mufti's opinion is not binding on the court, but Egyptian law makes it necessary for judges to seek a religious point of view on any death sentence.

The men are accused of setting up an "operations room" during the twin sit-ins and "masterminding a plot to sow chaos and attack and set fire to police stations, state institutions, public and private property, and churches."

Prosecutors also accuse the defendants of "coordinating with e-committees to disseminate doctored images of killed and injured protesters."

The dispersal came only a few weeks after Morsi, Egypt's first freely elected leader, was forcibly removed from office by the army following demonstrations against his single year in office.

The Egyptian government has since launched a sweeping crackdown on Morsi's supporters and his embattled Muslim Brotherhood, designating the latter a "terrorist group."
Last Update: Mar 17, 2015 9:54 am
RELATED TOPICS