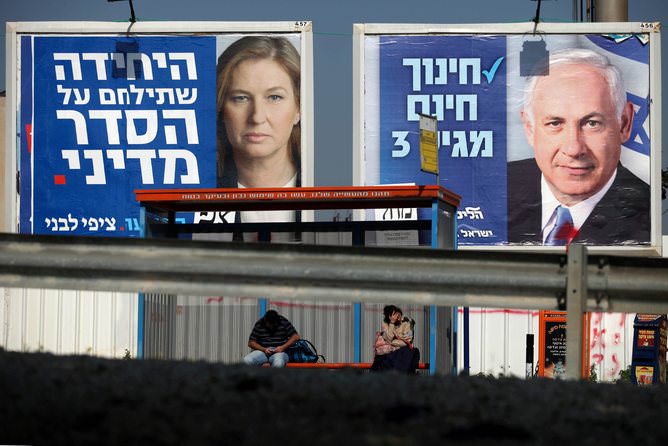 by Associated Press Mar 17, 2015 12:00 am
Israeli parliamentary elections ended Tuesday in a virtual deadlock, with Prime Minister Benjamin Netanyahu's Likud Party appearing to hold the upper hand in forming the next governing coalition.

All showed the centrist newcomer Moshe Kahlon with enough seats to determine who will be the next prime minister. Kahlon, a Likud breakaway, has not said whether he favors Netanyahu or Herzog.

The mixed results were sure to disappoint Herzog, who opinion polls had suggested could topple Netanyahu, and set off wild celebrations at Likud campaign headquarters in Tel Aviv.

"This is a great victory. It's almost a miracle," Likud lawmaker Ofir Akunis told The Associated Press. "For months, everybody attacked the Likud. And today is a beautiful day for the Likud. It sends a message that the people of Israel will decide for themselves."

Two polls showed the parties deadlocked with 27 seats each, and a third gave Likud a slight lead of 28-27.

Since the parties all fall short of the required 61-seat majority in parliament, the country will now head into weeks of negotiations as they try to form a coalition.

Israel is divided between two major "blocs" of voters right wing and religious parties that tend to take a hard line toward the Palestinians, and dovish parties focused on establishing a Palestinian state as part of a peace agreement.

The left wing appeared to have slightly more seats, but would rely heavily on a new Arab list that has said it will not sit in a coalition.

That gives Netanyahu and his right-wing allies the upper hand. But Kahlon, who has already demanded control of the Finance Ministry, is likely to drive a hard bargain before agreeing to join the government.

The vote was largely seen as a referendum on Netanyahu. While he focused his campaign almost entirely on security matters, his opponents, including Kahlon, turned their attention to bread and butter issues and the country's high cost of living.

Stav Shaffir, a leader of the Zionist Union, called the results a "clear vote of no confidence in Netanyahu."

She said the Zionist Union would wait for the official results before declaring victory or defeat, but claimed Netanyahu's opponents "have a majority."

Channel 2 TV's commentator Amnon Abramovitch predicted Netanyahu would form a rickety coalition, and that "he will be a prisoner in his own government."