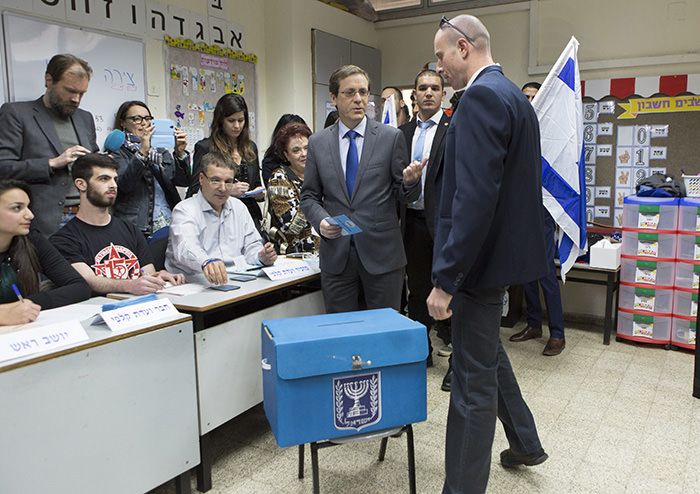 by Anadolu Agency Mar 17, 2015 12:00 am
The leader of Israel's left Labor party, Isaac Herzog, said on Tuesday that the country's elections, currently underway, constituted "a decision between hope and change, and desperation and disappointment."

Herzog went on to slam Prime Minister Benjamin Netanyahu, saying: "Those who want to continue on Bibi [Netanyahu]'s path of disappointment should vote for him."

"[But] those who want change should vote for the Zionist Union and give me the opportunity to create change," he was quoted by Haaretz as having said after casting his ballot in Tel Aviv.

"I urge all citizens of Israel to go and vote for a Zionist party - no matter if it's Meretz, Yisrael Beytenu, or Bayit Yehudi," Lieberman, leader of right-wing, nationalist Yisrael Beytenu party, was quoted by Yedioth Ahronoth as saying.

"What's most important is to go and vote for a Zionist party because it's important to preserve the Jewish and Zionist character of the State of Israel," Lieberman added as he cast his ballot in Nokdim, a Jewish settlement in the West Bank.

Israelis started to flock to polling stations across the self-proclaimed Jewish state on Tuesday to elect a new Knesset.

Twenty-five parties are competing in the election, but opinion polls indicate that only 11 of these will likely exceed the 3.25-percent electoral threshold.

Recent polls indicate that competition is expected to be fierce between right-wing Likud, headed by Prime Minister Benjamin Netanyahu, and the Zionist Union, an alliance between the Labor and Hatnuah parties led by Isaac Herzog and former Justice Minister Tzipi Livni respectively.

According to Israeli law, Election Day is an official holiday, on which polling stations open at 7am and close at 10pm.


Official election results will be announced Thursday, according to the electoral commission.