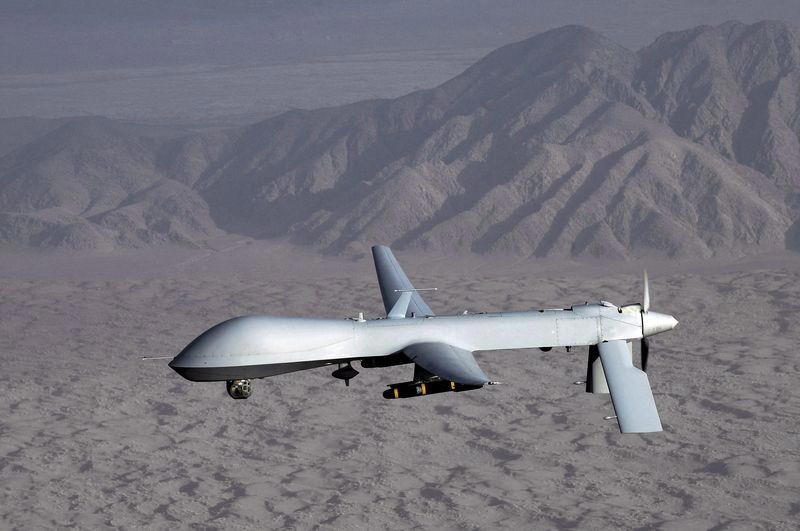 by Mar 17, 2015 12:00 am
Syria's military has shot down a US Predator drone over the coastal province of Latakia, a stronghold of Assad regime, state media said on Tuesday.

"Syrian air defenses brought down a hostile US surveillance aircraft over north Latakia," the official SANA news agency said in a breaking news alert. Without specifying a location or timing for the incident, state media published a series of close-up photos showing what they said was the mangled wreckage of a small aircraft.

The US military confirmed losing communication with a Predator drone over Syria on Tuesday and said it was looking into claims the aircraft was shot down. "US military controllers lost contact with a US MQ-1 Predator unarmed remotely piloted aircraft operating over northwest Syria", a US defense official said in an email. "At this time, we have no information to corroborate press reports that the aircraft was shot down. We are looking into the incident and will provide more details when available."

A Syrian regime military source, speaking to AFP on condition of anonymity, said the drone was not immediately identified as being American but was shot down as a hostile aircraft. "The aircraft entered areas where Daesh is not present," he added, using the Arabic acronym for the self-proclaimed Islamic State of Iraq and Sham group. "As soon as it entered Syrian air space, we considered it to be gathering security and military information on Syria's territory," the source in Damascus said.

It is the first time Syrian forces have attacked a US aircraft since the U.S.-led coalition began raids against the self-proclaimed Islamic State of Iraq and al-Sham (ISIS) in Syria in September.

Damascus has said it was given prior warning before the coalition began the strikes, and Foreign Minister Walid Muallem said last year that Washington had pledged its strikes would not hit the Syrian army.

The Syrian Observatory for Human Rights, a Britain-based monitor, said the drone was shot down in Al-Maqata, a village near the provincial capital of Latakia.

"There are no opposition fighters or ISIS-affiliated groups anywhere in that area, but there is a large presence of regime forces," said Observatory head Rami Abdel Rahman.

The US-led strikes in Syria have largely been focused on Aleppo and Raqqa provinces, where ISIS has strongholds.

But the campaign has also targeted the group elsewhere and hit suspected positions of fighters affiliated with Al-Nusra Front, the Syrian wing of Al-Qaeda.

ISIS is largely absent from Latakia, according to the Observatory, though Al-Nusra fighters have a presence in the region.

Latakia is home to the Assad family's ancestral village and is a bastion of the Alawite sect of Shiite Islam to which the president belongs.

It has been mostly insulated from the brutal fighting that has wracked Syria since anti-government demonstrations that began in March 2011 spiraled into a civil war following a regime crackdown.

More than 215,000 people have been killed in the conflict, nearly a third of them civilians, according to the Observatory.