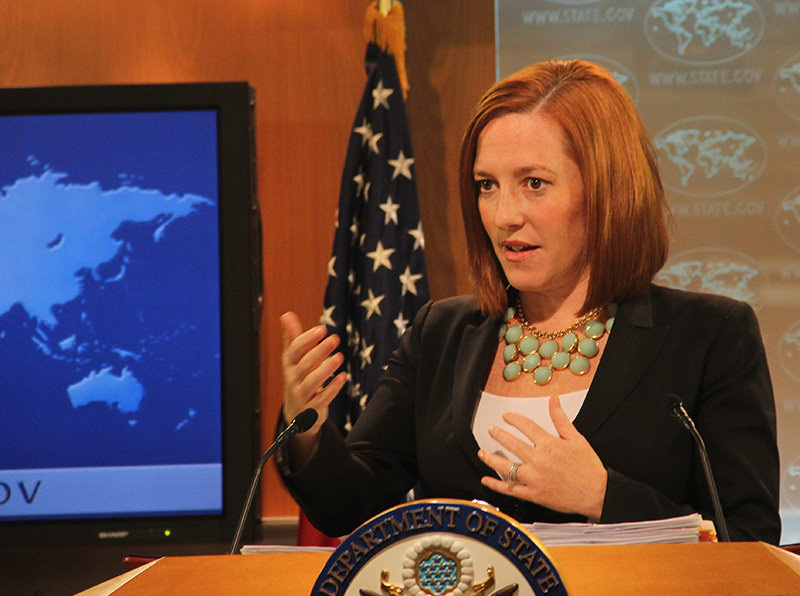 by Mar 17, 2015 12:00 am
Syrian President Bashar al-Assad will never be part of peace negotiations to halt the brutal civil war, US officials vowed Monday, adding they were taking every step to bring an end to his rule.

Top US diplomat John Kerry appeared to suggest in a weekend interview that Washington would have to talk with Assad eventually if peace was to be forged, but State Department spokeswoman Jen Psaki moved to clarify that assertion.

"As we have long said, there always has been a need for representatives of the Assad regime to be a part of that process," said Psaki.

"It would not be, and would never be -- and it wasn't what Secretary Kerry was intending to imply -- that that would be Assad himself."

Kerry's comments had caused alarm both abroad and among the US-backed opposition as the war entered its fifth year having claimed some 215,000 lives and with no end in sight after two rounds of failed Geneva peace talks.

Assad however said he was waiting to see whether there would be any concrete action by the United States.

"We are still listening to the comments and we have to wait for the actions and then we'll decide," the Syrian leader told Iranian television in remarks carried by state media.

Assad has long accused Washington of "supporting terrorism" because of its backing for the Syrian opposition.

"We have no choice but to defend our country," he added.

Assad spoke as Amnesty International said the Syrian government had killed more than 100 civilians, including 14 children, in a series of "ruthless air strikes" on a bastion of the Islamic State group last year.

In a new report released on Tuesday, the London-based human rights group said some of the strikes launched by the regime in November 2014 on the city of Raqa gave "every indication of being war crimes".

Raqa city is the self-proclaimed capital of ISIS in Syria, but Amnesty said there was no indication that militant positions were the target of the series of strikes.

French Foreign Minister Laurent Fabius meanwhile rejected any role for Assad in peace talks, saying it would be a "scandalous gift" to the militant group.

"The solution is a political transition which would preserve regime institutions, not Mr Bashar al-Assad," Fabius insisted.

"Any other solution which would keep Mr Assad in the saddle would be an absolutely scandalous, gigantic gift to Daesh," Fabius said, using another name for ISIS.

Turkey, which is hosting hundreds of thousands of Syrian refugees, insisted the war had been caused by the Assad regime.

"What is there to be negotiated with Assad?" Foreign Minister Mevlüt Çavuşoğlu demanded, quoted by the Anatolia news agency.

"You are going to have what negotiations with a regime that has killed over 200,000 people and has used chemical weapons?" he asked.

Psaki stressed the US was being guided by the wishes of the moderate opposition, fighting to oust Assad from power.

"There's no future for Assad in Syria... we're taking every step we can to bring an end to his rule there," she said, adding peace talks would be between the opposition and representatives of the regime.

The Syrian state press had boasted at the weekend that Kerry's comments recognised Assad's rightful role as the country's president, and suggested it could pave the way for American participation in talks on the conflict hosted by Russia next month.

Washington has not yet been invited to the Moscow talks, Psaki said, adding that while the US was open to "any effort consistent with the Geneva process to bring both sides back to the table", it was uncertain whether that would be the outcome.

Kerry said in an interview broadcast on Sunday that Washington could eventually negotiate with Assad.

"Well, we have to negotiate in the end," the US envoy said, when asked by CBS television if he would talk to Assad, stressing any such talks would be part of the 2012 Geneva process, which calls for a political transition in Syria.

But the Syrian opposition slammed the remarks, with Samir Nashar, a member of the US-backed National Coalition, saying they had "blurred the American position".

"America used to say that Assad had to step down... But now, Kerry has adopted this ambiguity that keeps Assad afloat in any political solution," he told AFP.

"Mr. Kerry, if you want dialogue with the killer, you are a murderer's example," said Twitter user Adnan al-Zahrani.

But on the ground, activists said Kerry's remarks were unsurprising.

"From the beginning, the Americans abandoned the revolution, and they prove it more each day," said Abu Adel, an activist in the rebel Jubar area outside Damascus.

"We cannot accept Assad staying on after the deaths of tens of thousands of martyrs."
Last Update: Mar 17, 2015 9:30 am
RELATED TOPICS