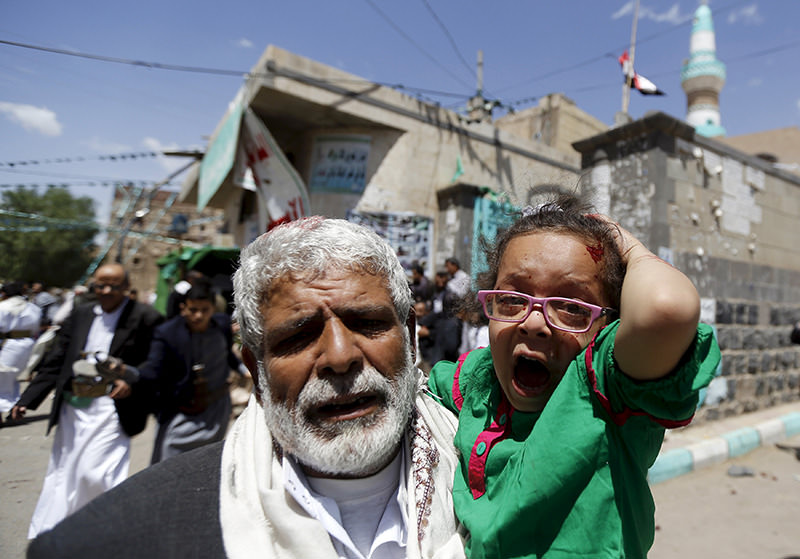 | Photo: Reuters
by Mar 20, 2015 12:00 am
The self-proclaimed Islamic State of Iraq and al-Sham (ISIS) have claimed responsibility for the bombings during Friday prayers at two mosques in Yemeni capital Sanaa, attended by Shiite Houthi militiamen, which left at least 137 dead and 345 wounded, medics said.

In an online statement, the previously unheard of Sanaa branch of IS warned that the bombings were "just the tip of the iceberg," AFP reported.

One suicide bomber struck inside Badr mosque in southern Sanaa while another targeted worshippers as they fled outside, witnesses said.

The Houthi militia's Al-Massira television said hospitals in the capital had made urgent appeals for blood donations.

Leading Houthi cleric Al-Murtada bin Zayd al-Muhatwari, the imam of the Badr mosque, was among those killed, a medical source said.

Footage aired by Al-Massira showed bodies lying in pools of blood outside the mosques, as worshippers rushed the wounded to hospitals in pick-up trucks.

Another suicide bomber blew himself up outside a mosque in the northern Houthi stronghold of Saada, a source close to the militia said.

Only the assailant was killed in that explosion and tight security at the mosque prevented the bomber from going inside, the source added.

The Houthis overran Sanaa in September and have since tightened their grip on power.

Their attempts to extend their control into other areas have been met by deadly resistance from Sunni tribes and Al-Qaeda.
Last Update: Mar 20, 2015 5:32 pm
RELATED TOPICS