Hard to find a path for peace, says Obama on Israeli-Palestinian issue 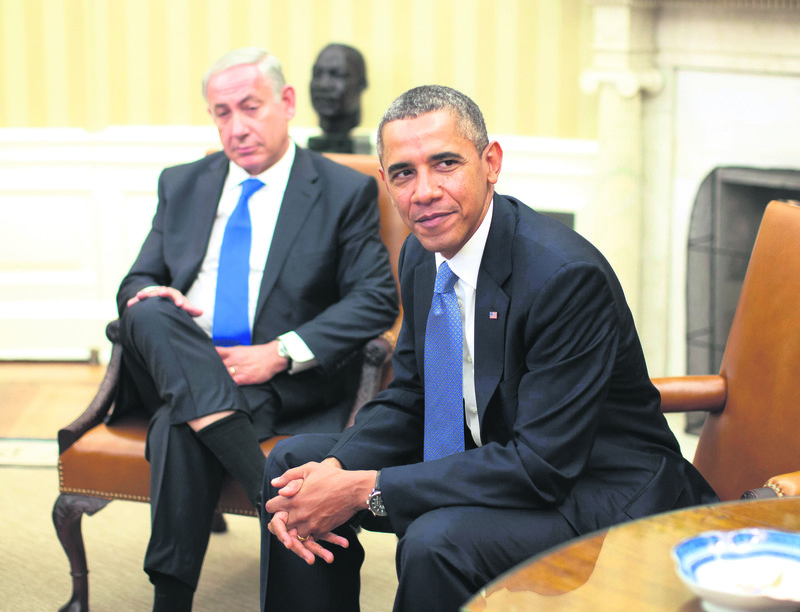 The relationship between U.S. President Obama and Israeli PM Netanyahu is troubled due to different stances on nuclear talks with Iran and the Palestinian issue.
by Daily Sabah Mar 22, 2015 12:00 am

U.S. President Obama, whose relationship with Israeli PM Netanyahu has been troubled, said that Israel is hampering the peace efforts to resolve the conflict and stressed that the only solution is the coexistence of the two peoples

Israeli Prime Minister Benjamin Netanyahu's right-wing Likud party won a resounding election victory on Tuesday that would likely deepen tensions with the Palestinians, the West and infuriated key ally Washington. His return to power for a fourth term likely spells trouble for Mideast peace efforts. After a closely-fought campaign, Netanyahu's rightwing Likud party confounded the polls by winning 30 of the 120 seats in parliament against 24 for the center-left Zionist Union.

U.S. President Barack Obama criticized Israeli Prime Minister Benjamin Netanyahu over his warning that Arab Israeli voters would vote "in droves." In his first public comments about Tuesday's elections that saw Netanyahu score a surprise third term, Obama told The Huffington Post he had "indicated that that kind of rhetoric was contrary to what is the best of Israel's traditions." The White House said earlier this week that Obama had warned Netanyahu on Thursday that his last-minute campaign pledge to oppose the creation of a Palestinian state and his comments about Israeli Arab voters would force a rethink in Washington. "Although Israel was founded based on the historic Jewish homeland and the need to have a Jewish homeland, Israeli democracy has been premised on everybody in the country being treated equally and fairly," Obama said. "And I think that that is what's best about Israeli democracy. If that is lost, then I think that not only does it give ammunition to folks who don't believe in a Jewish state, but it also I think starts to erode the meaning of democracy in the country," he said.

In the interview, Obama also said that he takes Netanyahu "at his word" for saying that an independent Palestinian state will never co-exist with Israel as long as he is in office. "We take him at his word when he said that it wouldn't happen during his prime ministry, and so that's why we've got to evaluate what other options are available to make sure that we don't see a chaotic situation in the region," Obama said. "And I indicated to him that given his statements prior to the election, it is going to be hard to find a path where people are seriously believing that negotiations are possible," Obama said. "But we are going to continue to insist that, from our point of view, the status quo is unsustainable," he said. "And that while taking into complete account Israel's security, we can't just in perpetuity maintain the status quo, expand settlements. That's not a recipe for stability in the region," he added.

During his election campaign, Netanyahu underscored that he would not allow the creation of a Palestinian state if elected. A campaign to boycott Israel seems poised to gain traction as he promised to expand construction in Jewish areas of east Jerusalem, the section of the city claimed by the Palestinians as their capital. Netanyahu's relations with the U.S. administration of Obama are frosty at best. Netanyahu infuriated the White House earlier this month when he delivered a speech to U.S. Congress criticizing an emerging nuclear deal with Iran. The Palestinians, fed up after years of deadlock with Netanyahu, are now likely to press ahead with their attempts to bring war crimes charges against Israel in the International Criminal Court. Renewed violence could also loom. The international community overwhelmingly supports the establishment of a Palestinian state in the West Bank, east Jerusalem and Gaza Strip, areas captured by Israel in 1967, and opposes settlement construction.

The European Union congratulated Netanyahu on his win while stating that the union is committed to working with the new Israeli government on launching a peace process with the Palestinians. "The EU is committed to working with the incoming Israeli government on a mutually beneficial relationship as well as on the re-launch of the peace process," the EU foreign policy chief Federica Mogherini said in a statement on Wednesday.

The strained relations between the Israeli PM and the U.S. President have also surfaced through the recent American public opinion polls, as well as the widening division and rivalry among the Republican and Democrat members of the Congress.

Relations between Israel and the U.S. are in an unprecedented era as it has become visible that the two countries are disappointed with each other's policies. "Relations with Israel have not always been excellent, but I think any observer would argue they've never been worse," said the Republican Arizona Senator John McCain on February 1 on CNN's "State of the Union." The harsh criticism by McCain has come after the White house announced that neither the Obama nor the Secretary of the State, John Kerry, would meet Netanyahu during his visit to the U.S. Netanyahu accepted the invitation by the U.S. House Speaker, John Boehner, to address a joint meeting of the House and Senate with a speech on March 3, two weeks before the Israeli elections on March 17. However, neither Boehner nor Netanyahu consulted the White House about Boehner's invitation to Netanyahu to the joint meeting, where the possibility of new sanctions on Iran we discussed, which was translated as a breach of the traditional diplomatic protocol. Netanyahu's acceptance received criticism from the Obama administration, which accused him of putting politics before the relations of two strong allies, and furthered tensions in the already strained relationship. The White House announced that President Obama would not meet the Israeli prime minister two weeks before the Israeli elections. "We want to avoid even the appearance of any kind of interference with a democratic election," said White House spokesman Josh Earnest according to Washington Post.

The rising tensions between the two historically allies' leaders, which have surfaced recently, has resulted from a serious of diplomatic confrontations which has contributed to the souring of the relations. In addition, it is no secret that Netanyahu and Obama have not been the closest friends, as one would expect from the leaders of the states that are such strong allies.
Last Update: Mar 23, 2015 10:35 am
RELATED TOPICS