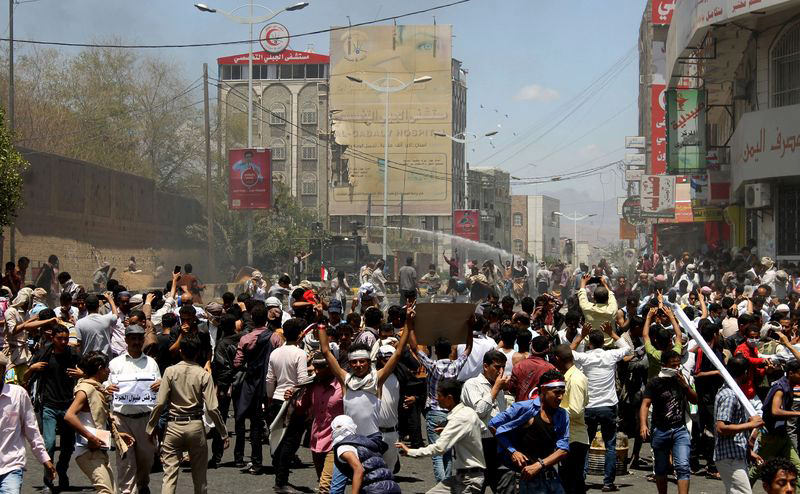 | Photo: AA
by Daily Sabah with Wires Mar 23, 2015 12:00 am
The UN's special envoy for Yemen warned an emergency meeting of the UN Security Council on Sunday that the recent events seem to be pushing Yemen "to the edge of civil war".

Talking to the Security Council by video link from Qatar, Jamal Benomar, the envoy, warned that the conflict in Yemen might become "protracted in the vein of an Iraq, Syria, Libya combined scenario" and stressed repeatedly in a video briefing that "peaceful dialogue is the only option we have."

"Following the suicide bombings and fighting," Benomar warned, "emotions are running extremely high, and unless a solution can be found in the coming days the country will slide into further violent conflict and fragmentation."

Following the takeover of the third largest city of Taiz by the Houthis militants in an escalation of a power struggle, militiamen headed for the Sunni president Abd-Rabbu Mansour Hadi's seat of power in the southern city of Aden. The violence is intensifying as the northern-based Houthis head south.

Troops and southern paramilitary forces loyal to Hadi have also reportedly deployed in Lahj province north of Aden, in anticipation of a possible militant advance. Western countries and Arab Gulf states have backed President Hadi as the country's legitimate ruler. The country is of strategic importance, as the country is located next to oil-rich Saudi Arabia and on a key-shipping route from the Suez Canal to the Gulf.

Amid increasing tension, Yemen's acting Foreign Minister Riyad Yassin on Monday called for military intervention by the Gulf states to protect Yemen's borders and vital facilities from Shiite Houthi militants. "We've called on the U.N. and the international community to impose a no-fly zone and bar the use of warplanes at airports under Houthi control," Yassin was quoted as saying in an interview with Saudi-owned daily Asharq Alawsat.

Yemen is increasingly divided between a north controlled by the Shia Houthis, who are allegedly backed by Iran, and a south dominated by President Hadi supporters. Yemeni officials accuse Shiite Iran of supporting the Houthis financially and militarily as part of a wider proxy war between Iran and Saudi Arabia that also involves Lebanon, Syria and Iraq, claims that Tehran denies.

The capital Sanaa has been under Houthi rebel control since September last year. They have been expanding their territory, clashing with President Hadi loyalists, local tribes and radical groups including al-Qaida on the Arabian Peninsula (AQAP) which also poses a significant security threat to the country's political stability.