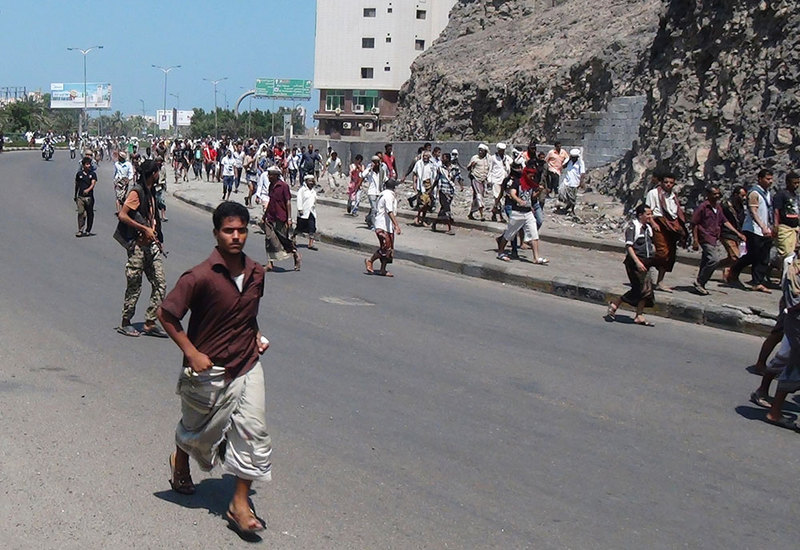 People flee after a gunfire on a street in the southern port city of Aden, Yemen, on March 25, 2015 | Photo: AP
by Anadolu Agency Mar 25, 2015 12:00 am
Houthi forces assumed control of Aden International Airport and presidential palace on late Wednesday, according to Turkey's Anadolu Agency. US officials have stated Yemeni President Hadi had left his residence voluntarily, meanwhile various reports have stated that he had left the country and fled to Djibouti. Official sources rejected this claim and stated that he is still in Yemen.

According to the source, pro-Hadi vigilantes were still trying to regain control of the airport.

The presidential palace in Yemen's southern city of Aden has also been ransacked, eyewitnesses have said.

"Citizens and militants in plain clothes have looted the palace," one eyewitness told the Anadolu Agency.

According to witnesses, soldiers were seen vacating the palace earlier Wednesday.

Yemen has been wracked by turmoil since last September, when the Houthis overran capital Sanaa, from which they have since sought to extend their influence to other parts of the country as well.

Late last month, Hadi fled Sanaa-where he had been placed under house arrest by the Houthis-to Aden.

Upon his arrival in the southern city, Hadi dismissed as "null" and "illegitimate" all recently-issued Houthi decrees. He also retracted a resignation he had tendered earlier to Yemen's parliament.

The Houthis, for their part, issued what they described as a constitutional declaration dissolving parliament and establishing a 551-member transitional council.

The declaration, however, was rejected by most of Yemen's political forces-along with some neighboring Gulf countries-which described it as a coup against constitutional legitimacy.