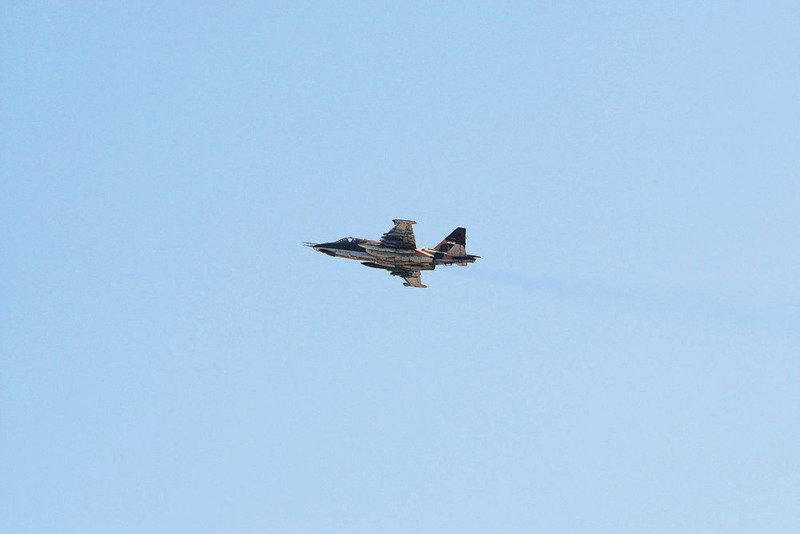 by Daily Sabah with AP Mar 27, 2015 12:00 am
The Iran-backed Iraqi forces along with Shiite militias fight Islamic State of Iraq and al-Sham (ISIS) militants to recapture Tikrit. Some 30,000 men have been involved in the operation to recapture Tikrit, one of ISIS's main hubs since they overran large parts of Iraq nine months ago. The offensive is the biggest military operation in the province since the militants seized swaths of north Iraq last June and advanced towards the capital Baghdad. Iraqi security forces on Tuesday retook a town next to Tikrit, military officials reported.

However, the 30,000 Iraqi forces along with Iran-backed militias have failed to drive out 1,000 ISIS militants. The U.S. which was deeply concerned over the involvement of Iran had refused to carry out aerial strikes to support the operation. At Iraq's request, the U.S. began airstrikes in Tikrit on Wednesday in support of a stalled Iraqi ground offensive. The bombing marked a significant expansion of the U.S. military role in Iraq. "These strikes are intended to destroy ISIS strongholds with precision, thereby saving innocent Iraqi lives while minimizing" unintended damage to civilian structures, Lt. Gen. James L. Terry, the commander of the U.S.-led campaign against ISIS, said in a written statement. "This will further enable Iraqi forces under Iraqi command to maneuver and defeat ISIL in the vicinity of Tikrit," Terry said. An Iraqi commander in the city said that a warehouse used to store ISIS weapons was bombed by a U.S. plane, and a U.S. official in Washington confirmed that arms warehouses were among the targets. The Washington official, who also spoke on condition of anonymity in order to discuss military details, said there were no more than one dozen airstrikes Wednesday, and said some were conducted by U.S. allies. The official had no details on the extent of allied participation, including which countries launched airstrikes. The official said Wednesday's attacks were the first in a series that would be carried out in the days to come as the coalition coordinates with Iraqi ground troops who have encircled Tikrit but not penetrated deeply into the city.

In an address to the nation Wednesday evening, Prime Minister Haider al-Abadi predicted success in Tikrit but did not say the U.S. was providing airstrikes. "We have started the final phase of the operation in Tikrit," he said. "You will liberate your ground, not anyone but you," he said in a speech to the Iraqi people. Al-Abadi praised all the groups involved in the battle against ISIS, including the so-called Popular Mobilization Forces, which the U.S. calls Iranian-backed Shiite militias, and well as the Sunni tribes and coalition forces. But he fell short of confirming that the coalition is playing a direct role in Tikrit.

Iraqi forces were instructed and directed by Iranian advisers. Among those directing operations is Iranian Gen. Ghasem Soleimani, commander of the powerful Revolutionary Guard's Quds Force. The overt Iranian role and the prominence of Shiite militias in the campaign have raised fears of possible sectarian cleansing should Tikrit, an overwhelmingly Sunni city, fall to the government troops. The U.S. and Human Rights Watch (HRW) warned an offensive to retake control of the Iraqi city of Tikrit must not fuel sectarian tensions. Sunni civilians have been suffering from both ISIS' atrocities and Shiite militias' aggression, many documents revealed. Tehran has been accused of fueling the sectarian division through supporting the extremist Shiite groups in Iraq that are historically in trouble with the Sunni residents of the country.
Last Update: Mar 27, 2015 2:23 am
RELATED TOPICS