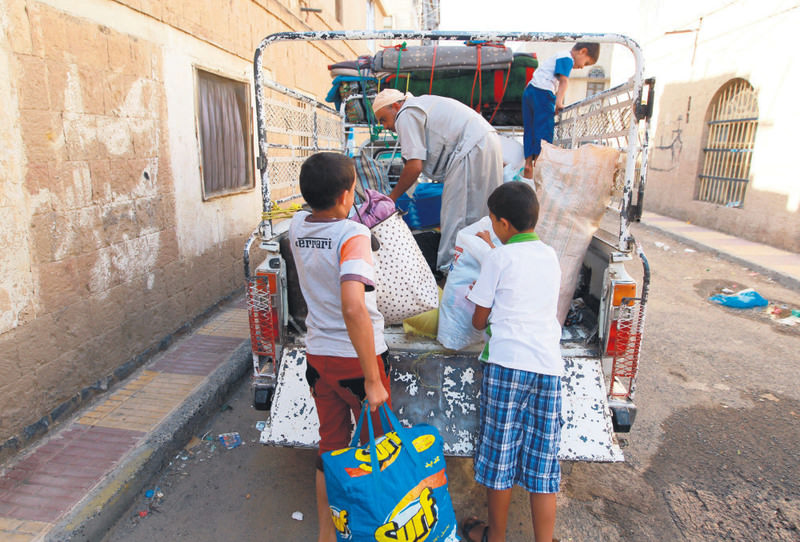 People leave their homes as the country started being dragged into a bloody civil war.
by Begüm Tunakan Apr 04, 2015 12:00 am

Up to 250,000 refugees residing in Yemeni camps have become targets of deadly attacks as the mounting civilian death toll proves serious violation of the law of war, Human Rights Watch said

Amid the Saudi-led campaign of heavy airstrikes on Houthi rebels, more than 250,000 refugees in Yemen were caught up in the ongoing conflict, becoming victims of war. With the civilian death toll on the rise due to attacks on refugee camps, various international human rights organizations have called for more attention to the humanitarian crisis in the country. "The deaths of so many civilians in a camp with no apparent military target heighten concerns about laws-of-war violations," said Joe Stork, Middle East and North Africa Deputy Director at Human Rights Watch. "All sides in Yemen's conflict need to do what they can to avoid harming civilians," he added.

The bombardment that hit a displaced persons camp in northern Yemen, leaving at least 40 civilians dead, was severely condemned by the international community, saying that the attacks on refugee camps were a violation of law of wars. The al-Mazraq camp located close to the Saudi Arabian border houses approximately 5,000 people in crude tents. The camp also suffers high rate of food insecurity. Who carried out the attack is as yet unknown. Both sides accused each other of targeting refugee camp. Yemen's foreign minister blamed Houthi rebels.

"People in al-Mazraq camp have been living in very harsh conditions since 2009, and now they have suffered the consequences of an airstrike on the camp," Doctors Without Borders (MSF) said.

"After this week's event, the situation has only worsened for those already suffering through a severe, humanitarian crisis. The international community must not abandon the people of Yemen during the most critical moments the country has seen in a long time," Jan Egeland, Secretary General of the Norwegian Refugee Council, condemning Monday's attack on refugee camps.

"While the international focus is on military events, the fighting parties, and the political implications, the consequences for the civilian populations are largely ignored," he added.

Yemen is suffering from a growing refugee crisis, hosting over 1 million refugees and migrants coming mostly from conflict-hit areas in Africa. There are around 250,000 refugees and 10,000 asylum seekers from Ethiopia, Somalia and Syria, according to the U.N. refugee agency. In addition, the deepening insecurity and violence have contributed to the internal displacement of many Yemenis. There are at least 330,000 internally displaced people (IDP) residing within the country, according to the U.N. figures released in July 2014. Since then, the numbers of new arrivals to Yemen's coast steadily grew as September 2014 became the largest single month on record with 12,768 new arrivals.

Yemen, due to its proximity to the Horn of Africa and the migratory routes to Saudi Arabia and beyond, has been the most attractive transit route for many seeking a better life. The majority of refugees have come from Ethiopia since 2008, as the number of Ethiopians taking refuge in Yemen hit more than 210,000 over the last two years. Somalis made up the second largest refugee group. In addition to the "arbitrary arrest and detention, forced returns as well as physical and sexual violence, often at the mercy of unscrupulous traffickers," the increased fighting around refugee camps has made them more vulnerable than ever.

As fighting spreads across the country, the Saudi-led U.S.-backed alliance continues to pound Houthi targets as part of Operation Decisive Storm that launched on March 26 to halt the Houthis advance. Saudi-war planes hit Aden International Airport in southern Yemen on Friday after the rebels quit the presidential palace. In addition to airstrikes, the Saudi-led coalition is considering an imminent ground invasion to push back the Houthis.

The capital Sanaa has been under Houthi rebel control since September last year. Since then, Iran-allied Shiite Houthis has made significant gains while taking northern Yemen under control. They have been expanding their territory, clashing with President Hadi loyalists, local tribes and radical groups including al-Qaida on the Arabian Peninsula (AQAP) which also poses a significant security threat to the country's political stability.