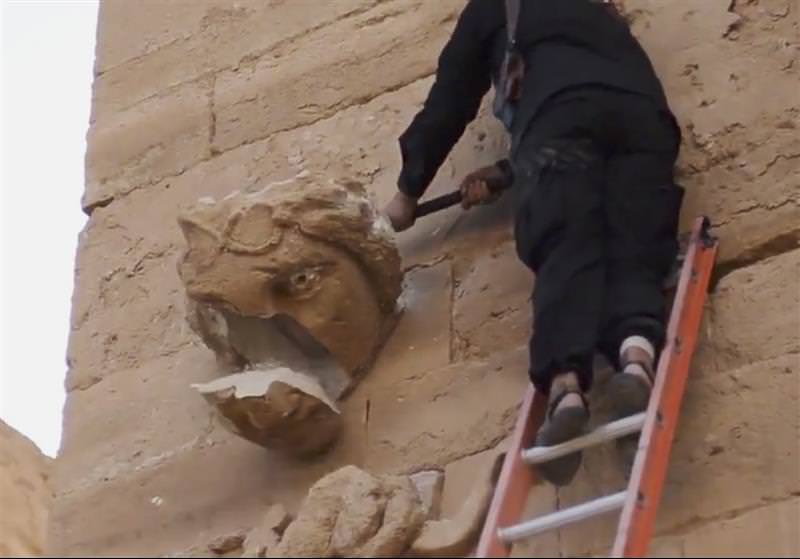 | AP Photo
by Associated Press Apr 04, 2015 12:00 am
The self-proclaimed Islamic State of Iraq and al-Sham (ISIS) destroyed the archaeological site in Iraq's ancient city of Hatra, by smashing sledgehammers into the walls, a new militant video purportedly from the group shows.

Militants attacked Hatra, a UNESCO World Heritage site, last month, officials and local residents said, though the extent of the damage remains unclear as it is in territory still controlled by the Islamic State group.

The video, released overnight Friday, shows a militant on a ladder using a sledgehammer to bang repeatedly on the back of one of the carved faces until it crashes to the ground and breaks into pieces. The video also shows a militant firing a Kalashnikov rifle at another, while men chop away the bases of some of the larger wall sculptures.

The video corresponded with Associated Press reporting on the attack and was posted to a militant website frequently used by the group.

One of the militants, who speaks Arabic with a distinct Gulf accent on the video, declares they destroyed the site because it is "worshipped instead of God." The Islamic State group, which holds a third of Iraq and neighboring Syria in its self-declared caliphate, has been destroying ancient relics they say promote idolatry that violates their fundamentalist interpretation of Islamic law. Authorities also believe they've sold others on the black market to fund their atrocities.

Hatra, located 110 kilometers (68 miles) southwest of the Islamic State-held city of Mosul, was a large fortified city during the Parthian Empire and capital of the first Arab kingdom. The site is said to have withstood invasions by the Romans in A.D. 116 and A.D. 198 thanks to its high, thick walls reinforced by towers. The ancient trading center spanned 6 kilometers (4 miles) in circumference and was supported by more than 160 towers. At its heart are a series of temples with a grand temple at the center a structure supported by columns that once rose to 100 feet.

The video's release comes after the Iraqi government this week claimed victory against the Islamic State group in Saddam Hussein's hometown Tikrit. Tikrit is 80 miles (130 kilometers) north of Baghdad on the main highway to Mosul, Iraq's second-largest city. Seizing Tikrit was key to an eventual campaign to retake Mosul and the historic sites near it.
Last Update: Apr 04, 2015 10:54 pm
RELATED TOPICS