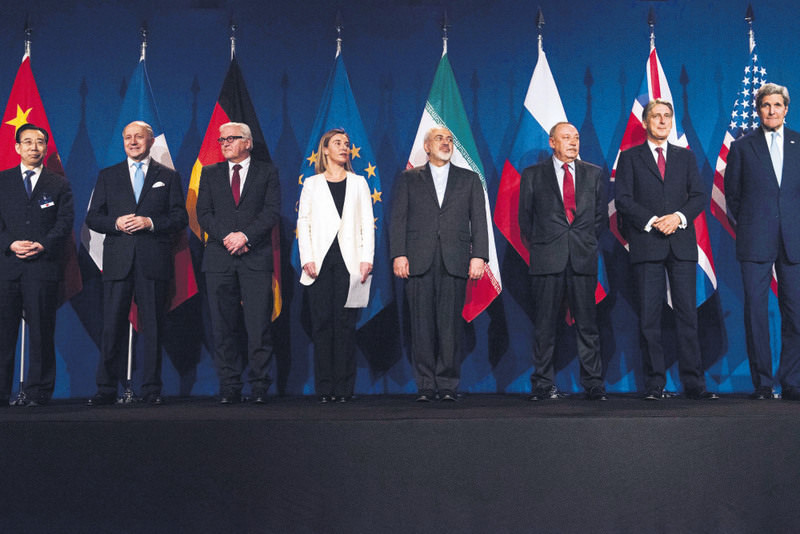 The representatives of the P5+1 and Iran pose after the framework accord was announced.
by Yusuf Selman İnanç Apr 04, 2015 12:00 am

While the P5+1 announced that a framework accord was agreed to on Iran's nuclear program, regional powers, including Gulf countries, Turkey and Israel, remain divided on the agreement

The nuclear talks in Lausanne, Switzerland between the P5+1(the five permanent members of the U.N. Security Counciland Germany) and Iran, after eight days of talks, produced the result of a framework to curb Iran's nuclear program that could allow Tehran to regain lost ground in the oil market. By ensuring that the sanctions imposed on Iran remain untouched until Western powers are satisfied with Tehran's adherence to the conditions of the agreement and giving negotiators until June 30 to hammer out a comprehensive agreement, the deal does not offer much of a chance for an increase of Iranian oil sales until 2016. U.S. and EU sanctions will be lifted after the International Atomic Energy Agency verifies that "Iran has taken all of its key nuclear-related steps," and if Iran fails to fulfill the commitments, the sanction will be put back into effect, according to the statement released by the negotiating countries. The framework accord offers Iran more than $110 billion a year with the dropping of sanctions and a return to the global market.

The framework includes limits on Iran's enrichment of uranium for 10 years. Iran agreed to reduce the number of installed uranium enrichment centrifuges to 6,104 from 19,000 and will operate only 5,060 of them for 10 years, according to a U.S. fact sheet. One of the most sensitive issues during the negotiations, Iran's research and development work, will also be limited. "Iran has agreed to not conduct research and development associated with uranium enrichment at Fordowfor 15 years," the U.S. fact sheet said. It also said Iran will remove the 1,000 more advanced second-generation centrifuges currently installed at Natanz and place them in International Atomic Energy Agency-monitored storage for 10 years. High enriched uranium can be used to make nuclear weapons, while low enriched uranium is used in nuclear power plants. Iran has insisted it wants it only for a peaceful nuclear energy program and denies it aimed to build an atomic bomb. Iran's "breakout" timeline – the time that it would take for it to acquire enough fissile material for one weapon –would be extended to at least one year for a duration of at least 10 years in this framework. It is currently assessed to be two to three months, the U.S. fact sheet said. Iran would gradually receive relief from lifting U.S. and European Union economic sanctions if it complies with the terms of a final deal. Some U.N. Security Council sanctions would be gradually lifted as well, though others would remain in place.

U.S. President Barack Obama hailed what he called a "historic understanding with Iran" and said: "Today, after many months of tough, principled diplomacy, we have achieved the framework for that deal. And it is a good deal, a deal that meets our core objectives. This framework would cut off every pathway that Iran could take to develop a nuclear weapon." He compared it to nuclear arms control deals struck by his predecessors with the Soviet Union that made the world safer during the Cold War. He also cautioned, however, that success is not guaranteed. However, Obama faced domestic objections as Senator Bob Corker of Tennessee, the Republican chairman of the Senate Foreign Relations Committee, issued a cautionary statement, saying: "It is important that we wait to see the specific details of today's announcement. We must remain clear-eyed regarding Iran's continued resistance to concessions, long history of covert nuclear weapons-related activities, support of terrorism and its current role in destabilizing the region."

Iranian Minister of Foreign Affairs Mohammad Javad Zarifalso welcomed the deal as he said: "The effect of this will be, when we implement our measures there won't be anysanctions against the Islamic Republic of Iran. And I think that will be a major step forward. We have stopped a cycle that was not in the interest of anybody, not in the interest of non-proliferation. We have built mutual distrust in the past … So what I hope is that through courageous implementation of this,some of that trust can be remedied. But that is for us all to wait and see." U.S. Secretary of State John Kerry said:"Diplomacy had paid off, insisting that simply demanding that Iran capitulate makes a nice sound bite, but it's not a policy." British Secretary of State for Foreign and Commonwealth Affairs Philip Hammond said: "This is well beyond what many of us thought possible even 18 months ago and a good basis for what I believe could be a very good deal. But there is still more work to do." French President François Hollandeand German Chancellor Angela Merkel also expressed their support for the deal. Turkey, which opposed the imposition of sanctions on Iran in 2015 at the U.N., was pleased with the deal. Foreign Minister Mevlüt Çavuşoğlu on Friday welcomed the initial agreement between Iran and world powers on curbing Tehran's nuclear program, but said he hoped Tehran would go further by the deadline for a final deal at the end of June. "When we look at the positions of the P5+1 right now, Iran is still below the line we were able to bring in [previous negotiations] in 2010, but we hope Iran will come to that line,"Çavuşoğlu said during a trip to Lithuania.

Russia, which supports Iran in Syria and Yemen, said the mistaken policy on Iran was amended. Russian Minister of Foreign Affairs Sergei Lavrov said: "This deal contains the principal put forward by Russian President Vladimir Putin, which is Iran's unconditional right to a peaceful nuclear program."

Celebrations broke out in Tehran on Thursday night after the negotiating leaders announced the framework accord was reached. Videos posted on social media showed cars driving through the streets of Tehran honking horns and passengers clapping. Twitter posts described people dancing in the streets of north Tehran and passing out sweets. Some posted pictures of a small gathering in front of the Ministry of Foreign Affairsand ecstatic crowds welcomed Zarif.

However, all regional actors were not happy with the deal as both Gulf countries and Israel have troubled relation with Iran over Syria, Yemen and Hezbollah. Gulf countries, whichaccuse Iran of fueling sectarianism in the region in Iraq, Syria and Yemen, remained silent on the deal. A senior Gulf Arab official told Reuters any reaction would come in the coming days, not from individual countries, but from the Gulf Cooperation Council (GCC). Speaking shortly before the news was announced, Adel al-Jubeir, the Saudi ambassador to Washington, said Riyadh could not comment until it saw the details of the accord. Saudi Arabia's recently deceased King Abdullah had urged the U.S. to "cut off the head of the snake."His successor, King Salman, who is expected to ease the oil-rich country's relations with regional powers, told Obama by phone that he hoped a final settlement of the nuclear dispute would "strengthen the stability and security of the region and the world." However, a Gulf source close to official Saudi thinking told Reuters: "It's about verification. If they don't comply, the boycott will be re-imposed. This is a reassuring result. Iran may think that as a result of this accord it is on the road to respectability."

Another opposition to the deal unsurprisingly came fromIsrael as Prime Minister Benjamin Netanyahu, who won his fourth victory in recently-held elections, described the accord as a historic mistake and said: "The concessions offered to Iran in Lausanne would ensure a bad deal that would endanger Israel, the Middle East and the peace of the world." He convened his cabinet and announced that talks will be held with top-positioned security officials. Netanyahu told Obama by phone that he was vehemently opposed to the agreement despite Obama saying that the deal represented significant progress toward a lasting solution that cuts off Iran's path to a nuclear weapon. Netanyahu was not convinced as he also said in a statement: "The deal would threaten the survival of Israel. This deal would legitimize Iran's nuclear program, bolster Iran's economy and increase Iran's aggression and terror throughout the Middle East and beyond. … It would increase the risks of nuclear proliferation in the region and the risks of a horrific war." Israeli Major General Nimrod Sheffer threatened Iran saying: "The military option has always been on the table as we have said all along. If it has not been mentioned much in the media recently, that does not reflect a change in policy."
Last Update: Apr 04, 2015 2:10 am
RELATED TOPICS