Palestinian refugees in Yarmouk camp stuck between ISIS and regime 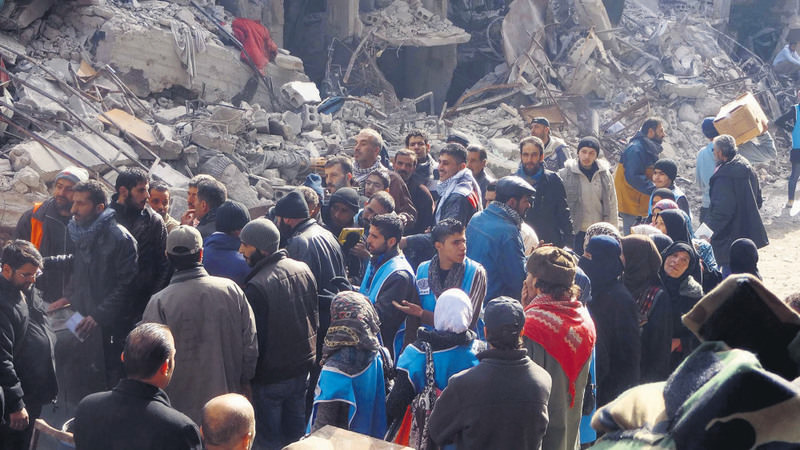 Thousands of Palestinians who are struggling with hunger and poverty are suffering from attacks by ISIS and the Assad regime. The PLO has evacuated some 2,000 people while many others were mobilized to resist ISIS

Yarmouk, an unofficial refugee camp, is a district of Syria's capital, Damascus and was established in 1957 when thousands of Palestinians were displaced by Israel. The camp has become one of the strongholds of the pro-Palestinian Liberation Organization (PLO) in the last few decades and has therefore established better relations with the Syrian regime. After the clashes started in 2011, camp residents, suffering from poverty, were subjected to fierce battles between the groups loyal to the regime and the opposition groups.

The regime has not avoided bombing its residents and cutting supply lines for food and water. At least 166 camp residents, including dozens of babies, have starved to death in recent years as the regime did not allow the influx of humanitarian aid materials. Thus, the victims of the Arab-Israeli wars became victims of the civil war. And now, the residents' bad luck has left them stuck in between the Islamic State of Iraq and al-Sham (ISIS) and the regime, with neither side behaving well.

ISIS militants captured the Yarmouk refugee camp by allying with the al-Qaida-affiliated al-Nusra Front. After facing severe food shortages, the lives of thousands of Palestinian refugees residing in Yarmouk camp in the south of Syria have faced the militants' aggression. Until the assault, ISIS did not have a major presence in the camp, as the insurgents were loyal to other opposition groups. It is not possible to receive verified news from the camp as Palestinian officials claim that ISIS was expelled while activists say that ISIS has gained more ground, controlling at least 90 percent of the camp. "ISIS now controls 90 percent of the camp," according to Rami Abdel Rahman, head of the Britain-based Syrian Observatory for Human Rights.

Hatem al-Dimashqi, an activist based in an area just south of Damascus, was quoted by AP as saying the Yarmouk camp had witnessed sporadic clashes and shelling in the last few days. Aknaf Beit al-Maqdis, a Palestinian faction opposed to the Syrian government and seen as being allied with Hamas has been fighting ISIS, but was pushed back, Abdel Rahman claimed. The faction is "now confined to the north-eastern section of the camp only," according to Abdel Rahman. Chris Gunness, a spokesman for the U.N. agency that supports Palestinian refugees known as UNRWA, told the Associated Press in Barcelona late on Sunday that the agency has not been able to send any food nor any convoys into the camp since the current round of fighting started. The Syrian regime has also launched attacks on ISIS with the aim of recapturing the camp's control, but does not differentiate civilians from the militants, the activists claimed.

Gunness said, "That means that there is no food, there is no water and there is very little medicine." PLO officials said the armed Palestinian factions have repelled ISIS militants. "Heavy fighting erupted Sunday night between Palestinian factions in Yarmouk and ISIS, but the former managed to repel ISIS's attack and made advances on several fronts," the PLO's Ahmed Magdalani, who oversees the Yarmouk camp, told Anadolu Agency. Touching on the humanitarian situation, he said "it is very tragic and difficult," adding that the PLO has attempted to evacuate as many people as possible. Al-Dimashqi said up to 2,000 people fled from the camp, while the U.N. said at least 18,000 unarmed camp residents including 3,500 children, are trapped.

Palestinian President Mahmud Abbas, who did not conceal his anger with the factions in the ongoing war, said that "residents of Yarmouk had been victimized by Syria's civil war. The Syrian government forces and different rebel factions were clashing and we pay the price." The PLO in Damascus has formed a "cell to handle this tragedy and they are trying to work it out with the least losses," Abbas said. "We are in touch with our brothers there to find a way out and protect our people," he added. Besides Abbas, Hamas also expressed its support for the residents of the camp and denounced ISIS's raids. A protest on Sunday was organized to show solidarity with the Palestinians in Syria. "What is happening in the camp is a real human crisis," Mohamed Abu Askar, a senior Hamas member, said during the protest. He called on the Palestinian leadership, Arab states and the international community to act to save the camp.

The besieged Yarmouk camp is located on the outskirts of Damascus, home to the largest Palestinian refugee community in Syria. Before the Syrian war erupted in 2011, it accommodated more than 180,000 Palestinian refugees. However, due to severe security conditions, around 140,000 refugees have been internally displaced as a result of the war. The recent reports state that over 18,000 civilians trapped in the camp have been suffering from desperate humanitarian conditions, without access to basics.

The Arab uprisings, which euphorically swept across the Middle East and North Africa several years ago, appealed to Syrians who had lived under the dictatorship of the Assad family since 1970, when Bashar's father Hafiz Assad seized power. Since then, the majority Sunnis were forced to live in a police state that tried to control every movement, organization and business through the use of a wide-ranging intelligence service. In March 2011, Syrians were emboldened enough to raise their voices against the dictatorship. However, the regime's response was not as peaceful as the protests, and the country was subsequently dragged into a deadly civil war after opposition groups took up arms against the government.

The Syrian civil war has now entered its fifth year and has caused the death of more than 200,000 people and at least 60,000 are missing. The war has also displaced nearly 10 million people. While the international and regional powers continue endless discussions, the regime does not just use conventional weapons, but also chemical weapons. About 13.6 million people, equivalent to the population of London, have been displaced by conflicts in Syria and Iraq, many without food or shelter, the U.N. refugee agency revealed. The 13.6 million include 7.2 million displaced within Syria – an increase from a long-held U.N. estimate of 6.5 million, as well as 3.3 million Syrian refugees abroad, 1.9 million displaced in Iraq and 190,000 who have left to seek safety. The vast majority of Syrian refugees have gone to Lebanon, Jordan, Iraq and Turkey. Western countries have been frequently criticized by aid agencies and the U.N. for not opening their borders to the Syrian refugees as the most developed countries have received the least number of refugees.
Last Update: Apr 07, 2015 10:04 am
RELATED TOPICS