Al-Qaida exploits its ground in Yemen during clashes 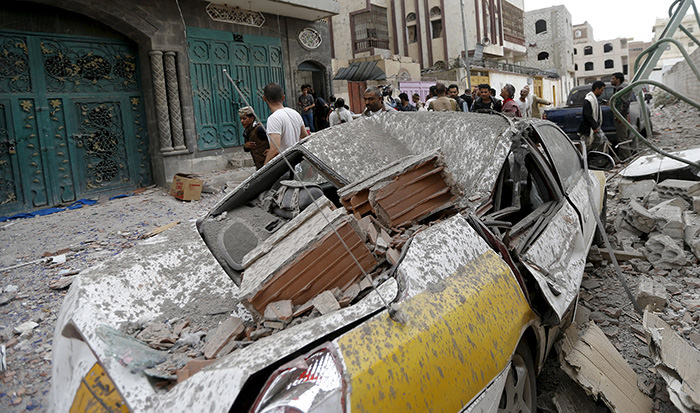 Amid fierce battles waged between the Saudi-led coalition, Sunni tribes and Iran-backed Shiite Houthis, al-Qaida is attempting to expand its control over southern parts of the country, benefiting from the absence of authority

Al-Qaida militants attacked a Yemeni military post near the Saudi border on Tuesday, killing an unconfirmed number of officials. In Tuesday's strike, al-Qaida militants seized a base near Manwakh, about 270 miles northeast of Sanaa, the capital, Reuters said, citing militant sources in Hadramout province, the militants' main stronghold. Last week the militants raided the Arabian Sea port of Mukalla in south. Reuters quoted the residents as saying al-Qaida now controls more than half of Mukalla.

The U.S., which supports the Saudi-led coalition against the Iran-backed Houthi rebels, decided to boost its weapons delivery. U.S. Deputy Secretary of State, Antony Blinken, said, "Saudi Arabia is sending a strong message to the Houthis and their allies that they cannot overrun Yemen by force. In support of that effort we have expedited weapons deliveries. We've increased our intelligence sharing, and we've established a joint coordination planning cell in the Saudi operations center."

Despite boosting its support for the ongoing attacks on Houthis, the U.S. also voiced its concern over the expansion of al-Qaida, which holds Yemen as a strategic stronghold for planning its activities across the world. U.S. Defense Secretary, Ash Carter, said on Wednesday, "The situation (in Yemen) is still obviously very unsettled and there are a number of different warring parties - the Houthis are one and AQAP is another - that have seized the opportunity of the disorder there and the collapse of the central government." Speaking at a news conference in Tokyo, Carter said, "We see them making direct gains on the ground there as they try to take territory, seize territory in these battle lines ...we are observing that al-Qaida is participating in that kind of fighting." Touching on the drone strikes by the U.S., he said that "Obviously it's always easier to conduct counter-terrorism operations when there is a stable government willing to cooperate in place. That circumstance obviously doesn't exist in Yemen. That doesn't mean we don't continue to take steps to protect ourselves. We have to do it in a different way, but we do and we are."

According to the data, given by the Long War Journal and the Washington-based International Security group, the U.S. has been conducting drone strikes in Yemen to eradicate al-Qaida. Since 2009, the U.S. has conducted at least 122 strikes, killing as many as 1,000 militants along with hundreds of civilians. It is controversial to what extent the drone strikes weaken al-Qaida, as there is no clear evidence that the militant group has been weakened. On the contrary, social media users reporting from Yemen claim that in the tumultuous situation, al-Qaida militants aim to increase their power and influence and recruit more people through arguing that Saudi Arabia and other Muslim countries ally with the U.S. to intervene in the country. Al-Qaida positions itself both against Saudi Arabia, one of the biggest allies of Washington in the region, and Shiite Iran and its allying local groups who are considered as heretical in the strict religious jurisprudence of Salafi-Wahhabist thought.

Yemen's slide toward civil war has made the country a crucial front in mostly Sunni Saudi Arabia's rivalry with Shiite Iran, which Riyadh accuses of stirring up sectarian strife through its support for the Houthis. Sunni Arab monarchies around Yemen have condemned the Shiite Houthi takeover as a coup and have proposed a military intervention in favor of Abd Rabbuh Mansur Hadi in recent days. The advance of the Iranian-allied Shiite Houthi group raises fears of the possible disintegration of the country. Sanaa has been under Houthi rebel control since September last year. The country has been facing severe political instability after the takeover of the presidential palace by Houthi militants, prompting Hadi to tender his resignation. Hadi fled to the southern port city of Aden, where he has re-established his presidency. As the country continues to be dragged into civil war, the U.N. has started to hold mediated peace talks between Houthis and Hadi's government in a bid to bring peace and stability back to the country.
Last Update: Apr 09, 2015 7:57 am
RELATED TOPICS