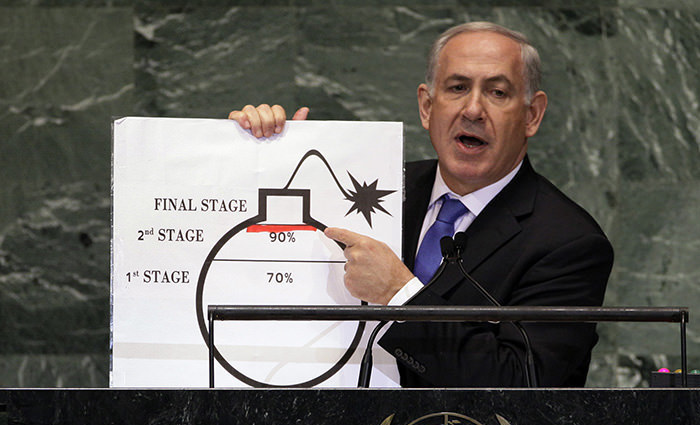 PM Benjamin Netanyahu of Israel shows an illustration as he describes his concerns over Iran's nuclear ambitions during his address to the 67th session of the United Nations General Assembly |AP Photo
by Anadolu Agency Apr 09, 2015 12:00 am
Israeli Prime Minister Benjamin Netanyahu's claims that Iran will be able to produce a nuclear weapon immediately after a nuclear deal with world powers concludes is "factually inaccurate," the State Department spokeswoman Marie Harf told reporters, disputing the claim that the deal has a fixed expiration date, on Wednesday.

"Israel shares the view that upon the expiry of the nuclear agreement with Iran the latter's breakout time to achieve nuclear weapons will be zero," Netanyahu, a vocal opponent of ongoing negotiations, said in a statement issued on Wednesday.

"This deal doesn't expire; there are pieces of this deal, important transparency measures, that go forever," Harf added.

The U.S. and world powers have been attempting to broker a deal with Iran that would see the Islamic republic receive a relief on their current sanctions in exchange for unprecedented regulation and inspections of its nuclear program.

Part of any such deal would be to establish conditions for Iran to have a one-year breakout period, or time that it would take for the country to develop a nuclear weapon should it break from any prospective agreement.

"Prime Minister Netanyahu has made clear his opposition to these negotiations and to this agreement, sometimes with not all the facts about what's in it," Harf said.