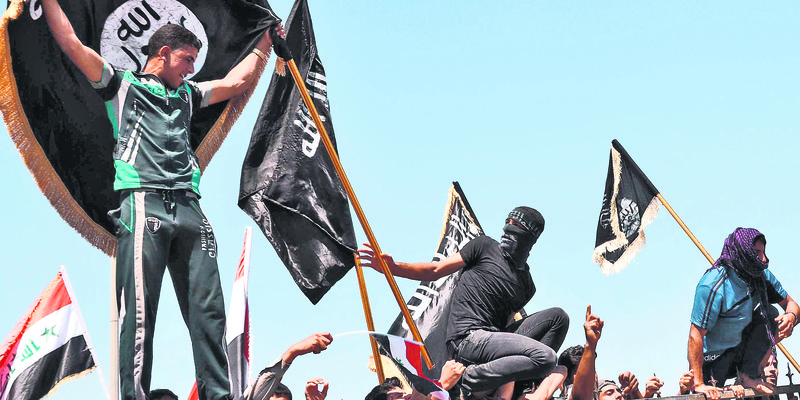 ISIS militants seek to establish a caliphate through capturing territories in Iraq and Syria.
by Yusuf Selman İnanç Apr 15, 2015 12:00 am

Residents and activists in Yarmouk refugee camp reported that Islamic State of Iraq and al-Sham (ISIS) militants who control large swathes of Iraq and Syria, have largely withdrawn from the camp after clashes with the armed Palestinian groups. But al-Qaida affiliated al-Nusra Front reportedly remained in the camp. A camp resident Abu Ahmed Hawari was quoted by Reuters as saying "Most of them have withdrawn in mostly to-and-fro skirmishes that took place between them and their adversaries."

ISIS militants captured the Yarmouk refugee camp by allying with al-Nusra Front two weeks ago. After facing severe food shortages, the lives of thousands of Palestinian refugees residing in Yarmouk camp in the south of Syria have faced the militants' aggression. Until the assault, ISIS did not have a major presence in the camp, as the insurgents were loyal to other opposition groups. ISIS's presence in the camp was welcomed by neither pro-regime groups nor Islamist groups like Hamas-backed Aknaf al Maqdis. The Palestine Liberation Organization (PLO) envoy to Damascus said that Nusra was now the main group in the camp. "They and Nusra are one. They are changing positions," Anwar Abdul Hadi told Reuters.

Yarmouk, an unofficial refugee camp, is a district of Syria's capital, Damascus and was established in 1957 when thousands of Palestinians were displaced by Israel. The camp has become one of the strongholds of the pro- PLO in the last few decades and has therefore established better relations with the Syrian regime. After the clashes started in 2011, the camp residents, suffering from poverty, were subjected to fierce battles between the groups loyal to the regime and the opposition groups. The regime has not avoided bombing its residents and cutting supply lines for food and water. At least 166 camp residents, including dozens of babies, have starved to death in recent years as the regime did not allow the influx of humanitarian aid materials. Thus, the victims of the Arab-Israeli wars became victims of the civil war. The besieged Yarmouk camp is located on the outskirts of Damascus, home to the largest Palestinian refugee community in Syria. Before the Syrian war erupted in 2011, it accommodated more than 180,000 Palestinian refugees. However, due to severe security conditions, around 140,000 refugees have been internally displaced as a result of the war. The recent reports state that over 18,000 civilians trapped in the camp have been suffering from desperate humanitarian conditions, without access to basics.

While ISIS retreated from Yarmouk in Syria, the group made advances in Iraq's Ramadi despite the U.S.-led coalition and Iraqi security forces along with the Iranian-backed Shiite militias continue assaults to free the captured cities. Reuters reported that local officials and police sources said that ISIS militants gained ground in western Iraq on Wednesday, overrunning another village near the capital of Anbar province in a dawn raid. The news agency also reported that hundreds of families were fleeing Albu Ghanim after security forces came under attack from the militants overnight and withdrew from the area, around 5 km (3 miles) northeast of the provincial capital Ramadi and the militants have been making inroads on Ramadi's northern periphery since the government announced the start of a new offensive last week to recapture the Sunni heartland of Anbar. After the militants seized the villages, activists reported that dozens of residents started fleeing to safer areas and the number is likely to increase.

Following the victory in Tikrit, Iraqi forces were readying to recapture Anbar province and ISIS's advance was not expected. But the militants struck back in Anbar as well as in Baiji where they blasted through the security perimeter around Iraq's largest refinery several days ago.

The Arab uprisings, which euphorically swept across the Middle East and North Africa several years ago, appealed to Syrians who had lived under the dictatorship of the Assad family since 1970, when Bashar's father Hafiz Assad seized power. Since then, the majority Sunnis were forced to live in a police state that tried to control every movement, organization and business through the use of a wide-ranging intelligence service. In March 2011, Syrians were emboldened enough to raise their voices against the dictatorship. However, the regime's response was not as peaceful as the protests, and the country was subsequently dragged into a deadly civil war after opposition groups took up arms against the government. The Syrian civil war has now entered its fifth year and has caused the death of more than 200,000 people and at least 60,000 are missing. The war has also displaced nearly 10 million people. While the international and regional powers continue endless discussions, the regime does not just use conventional weapons, but also chemical weapons. About 13.6 million people, equivalent to the population of London, have been displaced by conflicts in Syria and Iraq, many without food or shelter, the U.N. refugee agency revealed. The 13.6 million include 7.2 million displaced within Syria – an increase from a long-held U.N. estimate of 6.5 million, as well as 3.3 million Syrian refugees abroad, 1.9 million displaced in Iraq and 190,000 who have left to seek safety. The vast majority of Syrian refugees have gone to Lebanon, Jordan, Iraq and Turkey. Western countries have been frequently criticized by aid agencies and the U.N. for not opening their borders to the Syrian refugees as the most developed countries have received the least number of refugees.
Last Update: Apr 16, 2015 11:25 am
RELATED TOPICS