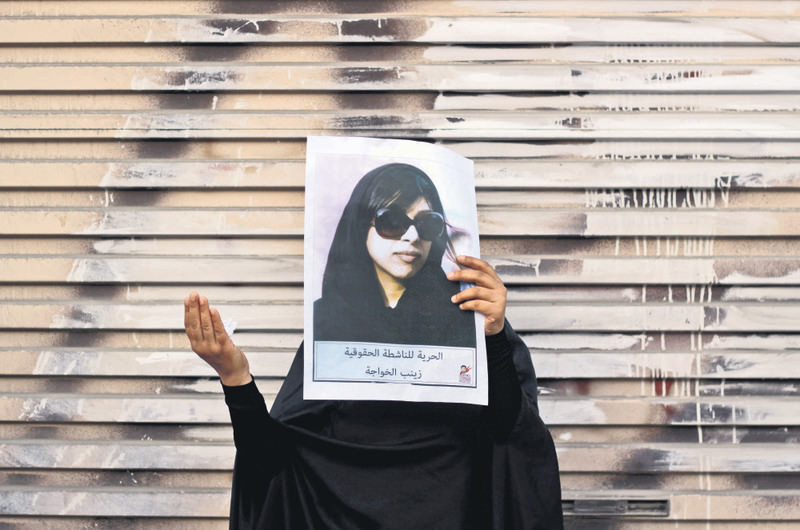 In this file photo, a Bahraini anti-government protester holds up a picture of jailed opposition human rights activist Zainab al-Khawaja.
by Daily Sabah with Reuters Apr 16, 2015 12:00 am

Gulf countries, including the UAE are frequently targeted by right groups due to human rights violations, as an Amnesty report reveals that Bahrain's reforms are insufficient in tackling the problems

Government reforms put in place by Bahraini authorities in the wake of widespread anti-government protests four years ago have failed to end serious violations of human rights in the strategically important Gulf nation, Amnesty International said in a report released Thursday. The 79-page report documents what the London-based group calls a "chilling crackdown on dissent" that includes the continued jailing of activists, bans on protests in the capital and instances of torture and other mistreatment of detainees. Western-allied Bahrain, a small island kingdom that is home to the U.S. Navy's 5th Fleet, was rocked by large-scale protests in February 2011 that were led by the country's majority Shiites seeking greater political rights from the Sunni monarchy. Bahraini authorities, backed by security forces from nearby Saudi Arabia and the United Arab Emirates, crushed the demonstrations, but low-level unrest continues. A fact-finding inquiry into the initial uprising called for overhauls in the political system and investigations into alleged abuses by security forces. Authorities have since put some reforms in place and created new institutions such as an ombudsman's office at the Interior Ministry, tasked with hearing complaints about police misconduct.

Amnesty says more must be done. "The international image the authorities have attempted to project of the country as a progressive reformist state committed to human rights masks a far more sinister truth," said Said Boumedouha, the group's deputy director of its Middle East and North Africa Program. "Four years on from the uprising, repression is widespread and rampant abuses by the security forces continue," he added. Bahraini officials did not respond to a request for comment on the report.

Amnesty's report includes accounts of alleged abuse by police over the past year, including claims by unidentified Bahrainis that they were struck by birdshot or tear gas canisters. Police earlier this month detained prominent rights activist Nabeel Rajab over online social media posts related to Bahrain's participation in Saudi-led airstrikes in Yemen. He already was appealing a verdict in a separate case involving earlier Twitter comments deemed insulting to government ministries when arrested. Other activists and government opponents are also behind bars, including Ali Salman, the head of al-Wefaq, the country's main Shiite opposition group, who is charged with incitement to forcibly topple the government. He denies the allegations.

Said Haddadi, the lead researcher on the report, told The Associated Press that Amnesty was allowed to carry out its research on the ground in Bahrain in May of last year and again this past January. While the visits were each limited to five days, Haddadi said he had access to activists as well as government ministers and other officials. "In terms of the access, we didn't have any issues," during the trips, he said.

The rights group urged Bahrain to take a number of steps, including a sweeping reform of the judiciary and the release of those jailed "for lawfully exercising their right to freedom of expression, association or peaceful assembly." It also called on Bahrain's allies, particularly the U.S., Britain and other European countries, to do more to raise concerns about rights abuses and to push for a comprehensive reform of the justice system. Amnesty released the report ahead of this weekend's Bahrain Grand Prix. The Formula One race is the nation's premier annual sporting event, and a chance for Bahrain to promote itself and Gulf Air, the state carrier, on the world stage.

The Gulf countries including the United Arab Emirates (UAE) and Saudi Arabia are often criticized by right groups due to the policies towards foreign workers, dissidents and gender issue. For instance, m Many reports on the conditions of foreign workers have been released and in many of them the UAE was slammed over its inability to provide sufficient humanitarian conditions for the workers. The UAE, especially Dubai, where labor unions are banned, has long faced criticism from human rights groups who say it turns a blind eye to cases of the non-payment of wages, lack of medical care and sub-standard housing for workers. Construction workers in the booming Gulf trade hub, which is building the world's tallest tower and man-made islands, have long complained about poor working conditions. The UAE government in 2008 revised the labor laws to include requirements that employers pay for migrant workers' travel, employment permits, medical tests and health care. It also closed down some workers' camps that do not meet health and safety standards in a crackdown on firms abusing foreign workers. But New York-based watchdog Human Rights Watch said a UAE draft labor law fell far short of international standards for the rights of workers.

Besides the workers' problems, the UAE has also been criticized due to its stance on opposition voices against the government. In a report released by Amnesty International last week, the UAE was accused of an "unprecedented clampdown on dissent," as more than 100 activists have been jailed since 2011 for calling for political transformation. The 80-page report was titled "There is no freedom here: Silencing dissent in the UAE," and included interviews with the victims of the country's repression.
Last Update: Apr 16, 2015 11:41 pm
RELATED TOPICS