Amid genocide debates, Palestinians suffering from Israeli aggression are ignored 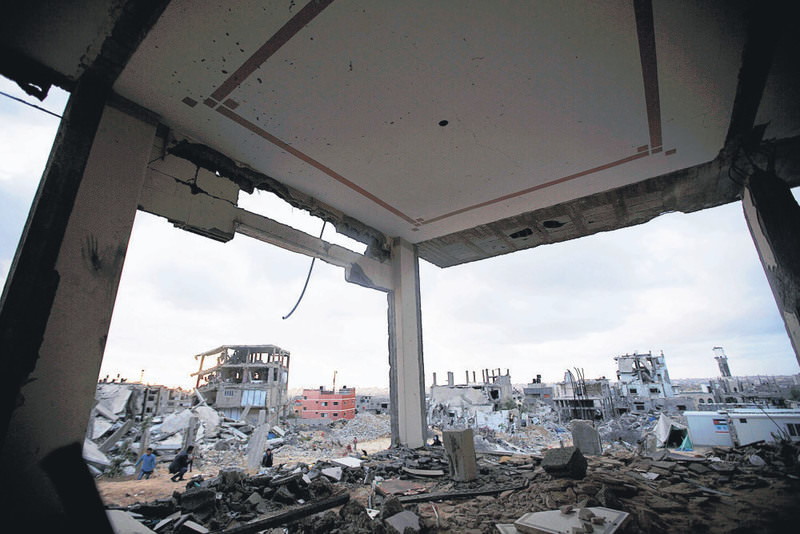 While the European Parliament asks its members to call the 1915 incidents a ‘genocide,' Israel marks Holocaust Remembrance Day. However, Palestinians who are subjected to continued aggression are not on the world agenda

The European Parliament on Wednesday adopted a resolution that urges all EU member states and Turkey to recognize the events of 1915 in the Ottoman Empire as the Armenian "genocide." Wednesday's vote came a day after the EU urged Turkey and Armenia to normalize their relations following a spat prompted by remarks made by Pope Francis over the 1915 events in which he described the killings of Armenians during World War I as "the first genocide of the 20th century." Besides the debates on the Armenian issue, Israel and Jews across the world marked Holocaust Remembrance Day. However, Palestinians who have suffered from Israeli aggression for decades are not on the agenda of the world powers despite the fact that the Palestinians face discrimination and lawless detention every day and are forced to leave their homeland so that Israel can build illegal settlements. A Palestinian, İbrahim İyad, told Anadolu Agency, "Israel mourns for the Holocaust and condemns anyone who does not recognize it. However, the same country commits similar war crimes on Palestinians." "Israel continues its efforts to turn Jerusalem into an entirely Jewish city through confiscating Palestinians' lands and building illegal settlements," another Palestinian, Ala Cemal said. Ali Ciddeh, residing in the West Bank, said: "We condemn the Holocaust. But today the problem is that the people who were subjected to genocide, do the same thing in Palestine."

Since its establishment, Israel has never avoided killing large numbers of unarmed people. After the decision was made to migrate to the Palestinian lands in the first Zionist Congress, held in 1897, Jews gradually moved to Palestine. After World War I and World War II, the number of Jews migrating to Palestine increased dramatically. In 1948, Israel started an independence war against Arab countries, which was called "Nakba" (big catastrophe) by Palestinians, as more than 1 million Arabs were displaced. In 1948, Israel killed nearly 20,000 Palestinians and several thousand Arab soldiers, while it lost around 4,000 soldiers and 2,000 civilians. In the second Israeli-Arab conflict, in 1956-1957, Israel lost 231 soldiers, while 1,650 Egyptian soldiers were killed, and there were hundreds of civilian casualties. In one of the biggest Israeli-Arab wars in 1973, 776 Israeli soldiers were killed, but the death toll on the Arab side was much higher as 15,000 Egyptians, 6,000 Jordanians and 1,000 Syrians were killed and more than a half million Palestinians were displaced. In 1978, Israel lost 18 soldiers, and 1,200 Lebanese and Palestinian people were killed. The war in Lebanon in 1982 was another catastrophe for Muslim Arabs. While the civil war was continuing in the country, Israel and pro-Israel rightist and Christian factions massacred 17,825 Arabs under the leadership of former Israeli Prime Minister Ariel Sharon who was famous for saying, "When I see dead Palestinians, while I am on the tank, I feel so happy." For three days, Muslim Arabs were murdered, raped and brutally executed. During the brutal attacks, 670 Israeli soldiers died. The massacres, which happened in Shatila refugee camp and Sabra area, have been marked as one of the bloodiest in recent history. Israel also killed 175 Arabs in 1996. In 2006 and 2009 the world again witnessed Israeli aggression on Arabs. While 1,200 civilians and 118 Hezbollah soldiers were killed in 2006, 1,440 Palestinians were murdered in just two days back in 2009 after intensive attacks. The total death toll of Israeli soldiers in 2006 and 2009 was 176. In 2012, during Operation Pillar of Defense, 177 Palestinians were killed, and six Israeli soldiers died.

Gaza suffered from the Israeli aggression that happened last summer and killed more than 2,000 people. Aid agencies struggling to shelter thousands of Gazans made homeless by war have resorted to building makeshift temporary homes out of metal and wood to evade Israeli restrictions on imports into the territory. Around 150,000 families are still homeless after last year's war between Israel and Hamas, in which Israeli bombardment destroyed thousands of apartment buildings and homes. Israel tightly limits the flow of concrete, cement, iron bars and other materials into Gaza. That means few homes have been rebuilt despite international pledges of billions for reconstruction. Rather than wait to rebuild permanent homes, some relief agencies have decided to build temporary structures with materials they can get. Israel's restrictions make it a slow and costly process to get hold of the building materials.
Last Update: Apr 17, 2015 9:33 pm
RELATED TOPICS