Tension escalating between US, Iran over Yemen 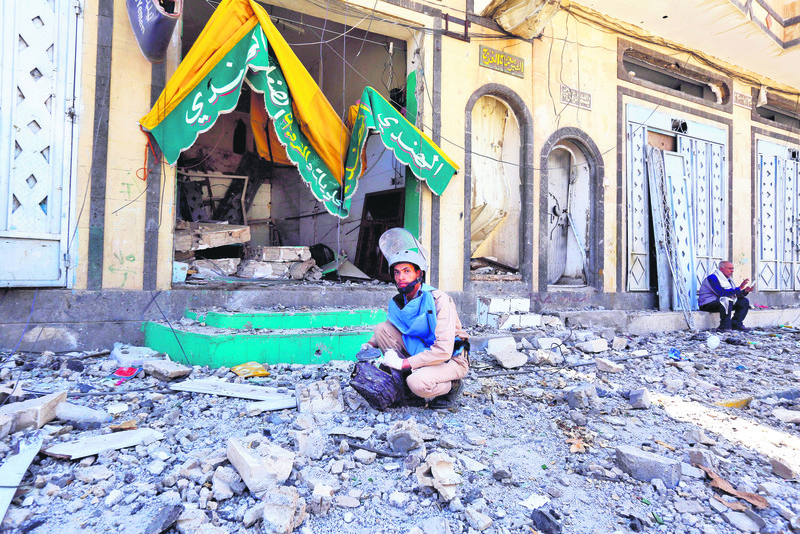 by Daily Sabah with Reuters Apr 22, 2015 12:00 am
Saudi Arabia has declared an end to air strikes against Iran-backed Houthi rebels who attempted to take over control through expelling the elected President Abd-Rabbuh Mansour Hadi. Saudi Arabia formed a coalition last month that includes many Sunni-Arab countries and was supported by the U.S., EU and Turkey despite the strict opposition of Russia and Iran. The airstrikes carried out by the coalition lasted more than three weeks and stopped after Saudi Arabia believed that Houthi rebels have been weakened. The military intervention coincided with the nuclear talks between the U.S. and Iran to lift the sanctions and normalize the relations to an extent. However Iran's explicit support for the rebels and the allegations that the Shiite state delivers weapons to Houthis angered the U.S.

Consequently, Washington has sent two vessels to Yemeni waters in the purpose of preventing Iran from sending arms since Tehran, allegedly, has at least eight ships in Yemeni waters. However, Tehran insistently claimed that the ships were carrying humanitarian aid.

U.S. President Barack Obama said on Tuesday the U.S. government had sent "very direct messages" to Iran warning it not to send weapons to Yemen that could be used to threaten shipping traffic in the region. The Pentagon said on Tuesday the presence of a large convoy of Iranian cargo ships in the Arabian Sea was one factor in the U.S. decision to deploy additional warships in the waters off war-torn Yemen. But Army Colonel Steve Warren, a Pentagon spokesman, dismissed reports the carrier USS Theodore Roosevelt and cruiser USS Normandy had been sent to the region to intercept Iranian ships carrying arms to Iranian-backed Houthi rebels fighting forces loyal to the U.S.-backed Yemeni president. In a televised interview on Tuesday on MSNBC's "Hardball," Obama said Washington had been "very straightforward" with Tehran about the issue. "Right now their ships are in international waters. There's a reason why we keep some of our ships in the Persian Gulf region and that is to make sure that we maintain freedom of navigation," Obama said. ""What we've said to them is that, 'If there are weapons delivered to factions within Yemen that could threaten navigation, that's a problem,'" he added. "And we're not sending them obscure messages. We send them very direct messages about it." The Pentagon spokesman Warren said he did not believe Navy warships patrolling the region had been in direct contact with the Iranian flotilla of nine cargo ships. He said the United States did not know what the Iranian cargo ships were carrying and declined to say whether the U.S. warships would stop and board Iranian vessels if they attempted to enter Yemeni territorial waters. "I'm not going to telegraph anything," Warren said.

Iran expressed its gratitude over the halt of the air strikes and claimed that it supports a diplomatic solution. Iran called on Wednesday for all sides in Yemen's conflict to start negotiations, saying long-term peace was possible. "History has demonstrated that military intervention is not a proper response to these crises and will instead exacerbate the situation," Iran's President Hassan Rouhani said at an Asian-African conference in Jakarta. "We believe that sustainable peace can prevail if military intervention is ceased and proper conditions are prepared for talks and dialogue among all political groups," he added. Iran had repeatedly said it would support a political solution to restore peace in Yemen. Iranian Foreign Minister Mohammad Javad Zarif welcomed the Saudi move as a "positive" measure and urged talks and the formation of a new government. "Positive developments in Yemen should be followed by urgent humanitarian assistance, intra-Yemeni dialogue and broad-based govt (government). Ready to help," Zarif said in a message on his Twitter account.

Saudi Arabia and the other Sunni Arab countries, especially the oil-rich Gulf kingdoms, consider that the power shift to Houthis is to witness the Iranian presence just near their borders. Iran that has been attempting to increase its influence in Iraq through mobilizing Shiite militias in the battle against Islamic State of Iraq and al-Sham (ISIS) supports the Assad regime in Syria and Houthis in Yemen. The Gulf along with Turkey and Egypt are deeply concerned over the Iranian expansion that is supported by Russia. The unseen conflict among the international and regional powers reflects itself on the other countries in the region, which suffer from the absence of political authority.
Last Update: Apr 23, 2015 12:18 pm
RELATED TOPICS