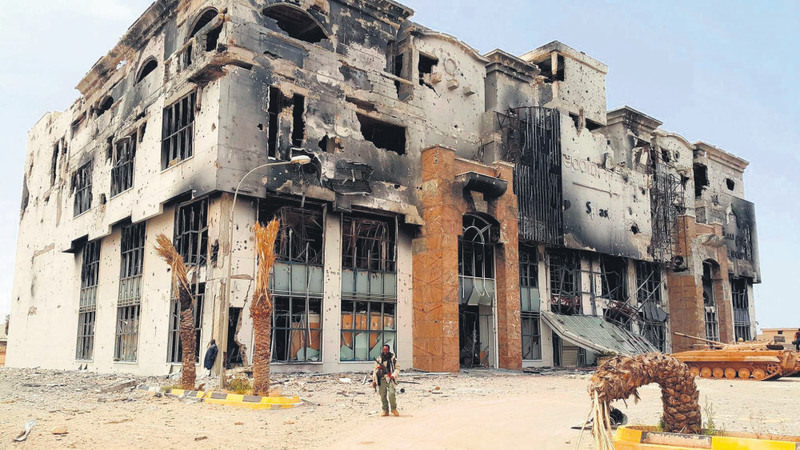 After Iraq and Syria, Libya has become the third big stronghold for ISIS.
by Daily Sabah with Wires Jun 01, 2015 12:00 am

As ISIS has stepped up attacks on the Libyan city of Misrata and declared war on key militias, Libya's Tripoli-based government has called for armed mobilization to combat ISIS

As the Islamic State and al-Sham (ISIS) militants have intensified violent attacks in Libya, Libya's Tripoli-based government called for an armed "mobilization" to fight against ISIS militants. The move came after the militants claimed a suicide bombing that killed five fighters allied to the government.

A statement by the Tripoli government urged "officers, soldiers... and all security forces and revolutionaries to mobilize" against ISIS. It also urged the international community to help it fight the militant group, saying it posed a "big threat" to Libya's security. "The Tripoli government is determined to continue fighting extremism and criminal gangs that operate under what is known as the Islamic State until they are uprooted," the statement added.

The dawn blast in northwestern Libya on Sunday was the latest in a series of attacks by ISIS in the politically divided North African country, where the militants have exploited chaos to gain a growing foothold.

Sunday's attack came a day after Libya's internationally recognized government called on the international community to provide it with weapons to battle ISIS. A statement warned that ISIS plans on seizing "oilfields to fund its operations," as it has done in Syria and Iraq, where the militants last year set up a "caliphate" straddling both countries. The government's plea comes after ISIS on Thursday seized control of the airport in Sirte, Gadhafi's home town east of Tripoli. It was the first time that ISIS in Libya has recorded such a military gain.

In a bid to find a solution to the crisis, the U.N. has for months struggled to broker a deal between warring parties through the creation of a national unity government. On Saturday night, a U.N.-sponsored meeting in neighboring Tunisia, of Libyan mayors and municipal representatives ended with a declaration calling for the "swift formation of a government of national accord." Special envoy Bernardino Leon said on Thursday that the U.N. was preparing a new draft peace agreement, which it plans to hand over to the rival factions in the first week of June.

Libya has become a hub for ISIS, as militants have long benefited from the absence of political authority. Due to the country's instability and insecurity, ISIS, which is allied with other radical elements in the country, has used Libya as a base for training its militants. The country is on the brink of collapsing into a failed state as the security situation continues to deteriorate due to deadly ongoing clashes between rival militias that threaten to tear the country apart. In the vacuum of Libya's political chaos, major armed militia groups have attempted to seize control of vast areas. The two main armed militias, Zintanis and Misratans, have been fighting to seize control of key installations, including the international airport. Libya has been suffering from a chronic lack of security, with various independent actors emerging. The powerlessness of the central authorities has led many people to take up arms against the government. State security forces have also failed to protect the government, leaving the country unprotected and open to heavy clashes.
Last Update: Jun 01, 2015 11:08 pm
RELATED TOPICS