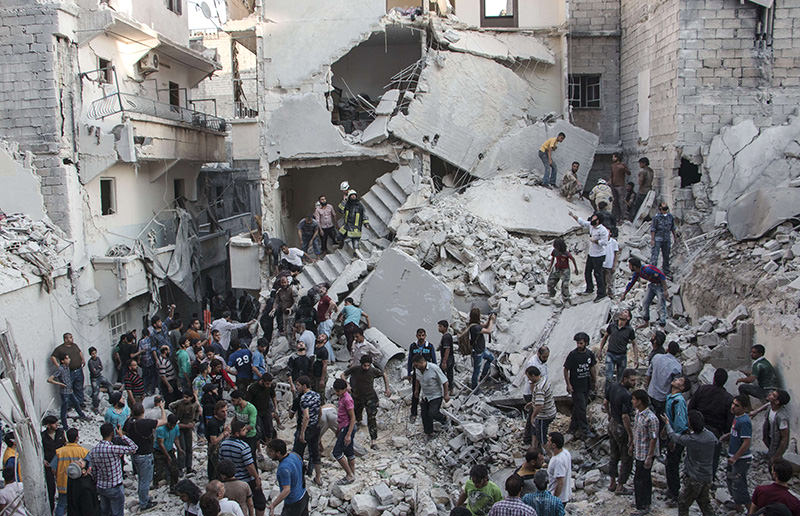 People gather at the scene after Syrian government forces allegedly dropped barrel bombs on the northern Syrian city of Aleppo, on May 30, 2015 (AFP Photo)
by Daily Sabah with AFP Jun 01, 2015 12:00 am
The UN envoy to Syria, Staffan de Mistura, has condemned the regime bombing of civilian areas as "totally unacceptable" after barrel bombs dropped from government helicopters on Saturday killed more than 140 civilians in Syria's northern Aleppo province.

"The news of aerial bombing by Syrian helicopters on a civilian area of the Aleppo neighborhood of Al-Shaar deserves the most strong international condemnation," UN envoy Staffan de Mistura said in a statement.

"The use of barrel bombs must stop," he said. "All evidence shows that the overwhelming majority of the civilian victims in the Syrian conflict have been caused by the use of such indiscriminate aerial weapons."

He said it was "totally unacceptable that the Syrian air force attacks its own territory in an indiscriminate way, killing its own citizens."

The Syrian Observatory for Human Rights said regime air strikes throughout Syria killed at least 140 people on Saturday, including 20 in a rebel-controlled village in northwest Idlib.

It said 22 people were killed in raids on the northeastern town of Al-Shadadeh.

The death toll did not include another 43 people -- including fighters from ISIS and their families -- killed in a government raid on the same town.

Syria's conflict, which began in March 2011, has left more than 220,000 people dead and forced millions to flee.

Several rounds of peace talks have made no headway and the UN envoy's efforts to broker a ceasefire in the second city of Aleppo were rejected by rebel factions.
Last Update: Jun 01, 2015 11:54 am
RELATED TOPICS