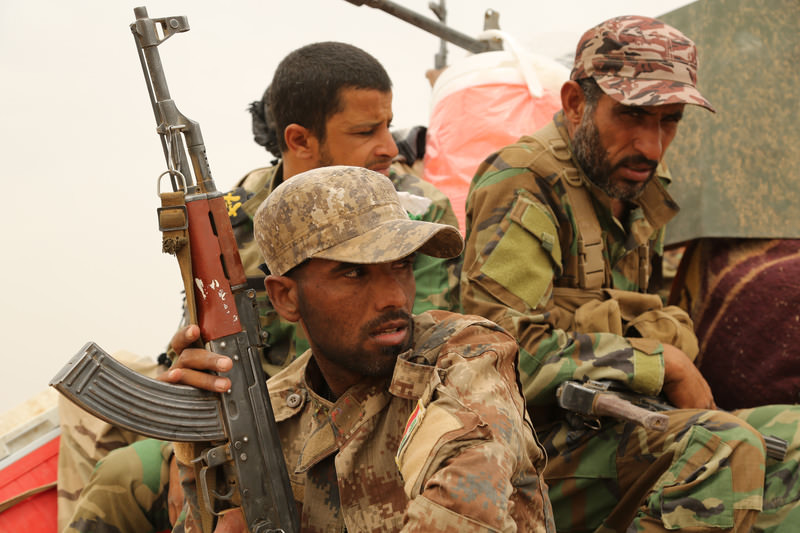 Fighters from the Badr Brigades Shiite militia patrol at the front line on the outskirts of Fallujah, Anbar province, Iraq, Monday, June 1, 2015 (AP Photo)
by Daily Sabah with Wires Jun 02, 2015 12:00 am

At a Paris meeting, Iraqi Prime Minister Al-Abadi urged the anti-ISIS coalition to provide him with more support on the ground as the militants have recently seized more ground in Ramadi and Anbar from the disordered Iraqi army

Iraq's Prime Minister Haider al-Abadi met with the international coalition fighting the Islamic State and al-Sham (ISIS) militants at the French Ministry of Foreign Affairs in Paris to discuss the failed strategy in stopping the militants' advance on the ground. During the meeting, Iraqi Prime Minister al-Abadi urged the coalition partners for more global support in the fight against ISIS, as he outlined plans to claw back territory from the militants in crunch talks with his allies in Paris. He called on more intelligence and more action from international allies to stop militants from gaining ground both in Syria and Iraq. He also blamed the international coalition for the ongoing flow of foreign militants across the border into the country, saying that most ISIS fighters who have seized large swathes of Iraq were now foreign, and therefore an "international problem." He said that until recently, around six out of 10 fighters were Iraqi and the remainder foreign, whereas the proportion was now reversed.

Tuesday's meeting of some 20 coalition ministers comes as Iraq is trying to win back control of Ramadi, the seizure of which by ISIS militants two weeks ago struck the biggest blow to the coalition since it began striking jihadist positions in August.

U.S. Pentagon Chief Ashton Carter blamed Iraqi forces for the loss, saying there was "an issue with the will of the Iraqis to fight," in comments that angered Baghdad.

The Iraqi prime minister, who is to outline his plans to liberate the Sunni province of Anbar and its capital Ramadi, is also facing pressure for Baghdad to be more inclusive of the Sunni minority, seen as key to winning the battle. Iraqi Prime Minister al-Abadi, who co-chairs the meeting with French Foreign Minister Laurent Fabius, has been put under pressure from the anti-ISIS coalition to show that he can control the powerful Shiite militias whose military muscle he depends on, and whose earlier abuses have stoked anger toward his government. The mobilization of Sunni tribal fighters against ISIS was one of the focal points at the meeting. "This is not a business-as-usual meeting," a senior U.S. State Department official told reporters. "We are coming in the wake of the events in Ramadi. We are coming to discuss Prime Minister al-Abadi's plan ... for liberating Ramadi and Anbar province."

On May 17, ISIS seized Ramadi from the demoralized and disordered Iraqi army. The city is just 90 kilometers west of Baghdad and the capital of the overwhelmingly Sunni Anbar province. Since then, government troops reinforced by Shiite militias have been building up positions around the city. Many of Iraq's minority Sunnis dislike ISIS, but also fear the Shiite militias after years of bloody sectarian strife. Al-Abadi, a moderate Shiite, can only persuade Sunni tribes to fight ISIS if he demonstrates that he can control the powerful Shiite militias whose military muscle he now depends on.

Meanwhile, the militants have claimed a suicide attack on Tuesday on an Iraqi police base north of Baghdad that killed at least 37 people. A Somali man detonated an explosives-rigged armored vehicle inside the base, while a Tajik and a Syrian blew up a Humvee and a truck in the area, ISIS said in an online statement. The area is being used in a military operation aimed at cutting off ISIS's supply lines in Anbar, a province west of Baghdad where the jihadis overran the city of Ramadi last month.

ISIS fighters have over the past year seized a formidable arsenal of military vehicles, weapons and ammunition from retreating Iraqi forces as they swept through much of the country's Sunni Arab heartland. Iraqi security forces have in recent days successfully repelled several suicide attacks involving explosives-laden vehicles, thanks to anti-tank systems, but not all forces have access to those weapons. The attack on the police base came a day before members of the U.S.-led coalition who were carrying out air raids against ISIS and providing training and weapons to Iraqi forces, held talks in Paris on a string of major battlefield gains by the jihadis in Iraq and Syria.
Last Update: Jun 02, 2015 4:22 pm
RELATED TOPICS