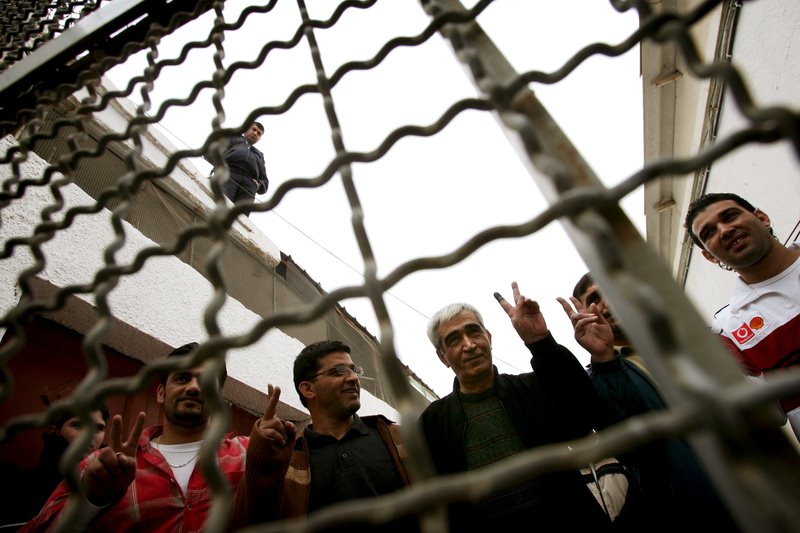 |Reuters Photo
by Anadolu Agency Jun 06, 2015 12:00 am
Israel has detained around 850,000 Palestinians since June 1967, the Palestinian Liberation Organization announced on Friday.

Abdul-Nasser Farawnah, director of the statistics department in the Palestinian Liberation Organization's Ministry for Detainees' Affairs, released a statement on the 48th anniversary of the 1967 Arab-Israeli War, saying that the number of detainees in the last 48 years made up 20 percent of the nation living in the occupied territories.

"The occupation forces do not make a distinction between gender or age," the statement said, adding that detention operations touched Palestinians of all classes, including laborers, academics and former ministers.

"Since 1967, 206 Palestinians died after being detained, including 71 from torture, 54 of medical negligence, 74 of premeditated murder and seven from soldiers' shots," the organization said, adding that Israel had released many prisoners with poor health in order to avoid the responsibility of caring for them.

There were currently about 6,000 Palestinians detained, including 200 children and 25 women, in 22 Israeli prisons and interrogation centers, according to the statement.

At least 1,600 of the detained have complained of poor health and various diseases, the statement added.

Israel occupied the West Bank, Gaza Strip, Sinai and the Golan Heights during the Six-Day War, or Nakba (catastrophe) as known in Arabic, which started on June 5, 1967, when the Israeli air force launched a surprise attack against Egyptian air force positions in Sinai.
Last Update: Jun 06, 2015 3:45 pm
RELATED TOPICS