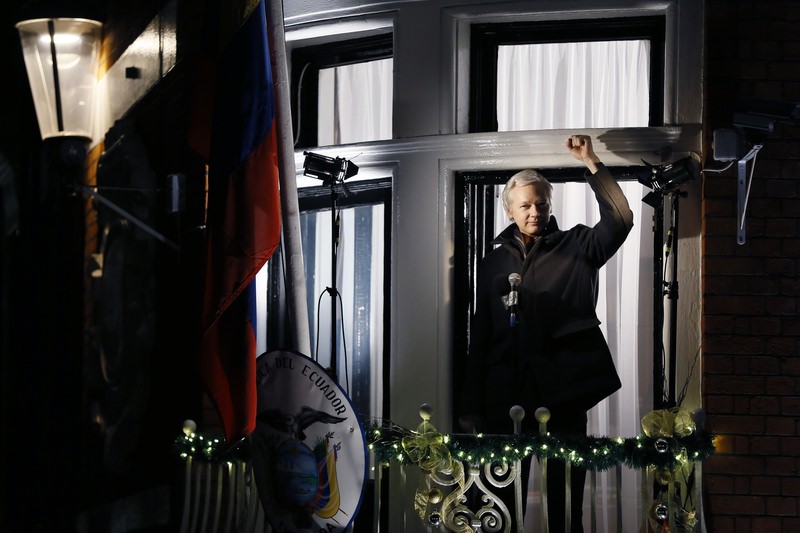 Julian Assange, founder of WikiLeaks speaks to the media and members of the public from a balcony at the Ecuadorian Embassy in London, Dec. 20, 2012 (AP Photo)
by Associated Press Jun 20, 2015 12:00 am
WikiLeaks announced on Friday that it plans to publish more than 500,000 Saudi diplomatic documents to the Internet, reminding its famous release of U.S. State Department cables in 2010.

WikiLeaks said in a statement that it has already posted roughly 60,000 files. Most of them appear to be in Arabic.

There was no immediate way to verify the authenticity of the documents, although WikiLeaks has a long track record of hosting large-scale leaks of government material. Many of the documents carried green letterhead marked "Kingdom of Saudi Arabia" or "Ministry of Foreign Affairs." Some were marked "urgent" or "classified." At least one appeared to be from the Saudi Embassy in Washington.

If genuine, the documents would offer a rare glimpse into the inner workings of the notoriously opaque kingdom. They might also shed light on Riyadh's longstanding regional rivalry with Iran, its support for Syrian rebels and Egypt's military-backed government, and its opposition to an emerging international agreement on Tehran's nuclear program.

One of the documents, dated to 2012, appears to highlight Saudi Arabia's well-known skepticism about the Iranian nuclear talks. A message from the Saudi Arabian Embassy in Tehran to the Foreign Ministry in Riyadh describes "flirting American messages" being carried to Iran via an unnamed Turkish mediator.

Another 2012 missive, this time sent from the Saudi Embassy in Abu Dhabi, said the United Arab Emirates was putting "heavy pressure" on the Egyptian government not to try former president Hosni Mubarak, who had been overthrown in a popular uprising the year before.

Some of the concerns appear specific to Saudi Arabia.

In an Aug. 14, 2008 message marked "classified and very urgent," the Foreign Ministry wrote to the Saudi Embassy in Washington to warn that dozens of students from Saudi Arabia and other Gulf countries had visited the Israeli Embassy in the U.S. capital as part of an international leadership program.

"They listened to diplomats' briefings from the embassy employees, they asked questions and then they took pictures," the message said, asking the embassy for a speedy update on the situation.

Another eye-catching item was a document addressed to the interior and justice ministers notifying them that a son of Osama bin Laden had obtained a certificate from the American Embassy in Riyadh "showing death of his father."

Many more of the dozens of documents examined by The Associated Press appeared to be the product of mundane administrative work, such as emails about setting up a website or operating an office fax machine.

The AP was not immediately able to reach anyone whose phone numbers or email addresses were published in the various documents, but WikiLeaks spokesman Kristinn Hrafnsson told AP he was confident that the material was genuine.

It is not clear how WikiLeaks got the documents, although in its statement the website referred to a recent electronic attack on the Saudi Foreign Ministry by a group calling itself the Yemen Cyber Army. Hrafnsson declined to elaborate on the statement or say whether the hackers subsequently passed documents on to WikiLeaks.

"As a matter of policy we're not going to discuss the source of the material," he said.

The Saudi Embassy in Washington did not immediately return messages seeking comment.

In its statement, WikiLeaks said the release coincided with the three-year anniversary of its founder, Julian Assange, who sought asylum in the Ecuadorian Embassy in London.

Assange took refuge in the embassy to avoid extradition to Sweden, where he is wanted for questioning about alleged sex crimes. Assange has denied any wrongdoing.