Donors fail to deliver on their pledges to Syrian refugees, UN aid agencies short on funds 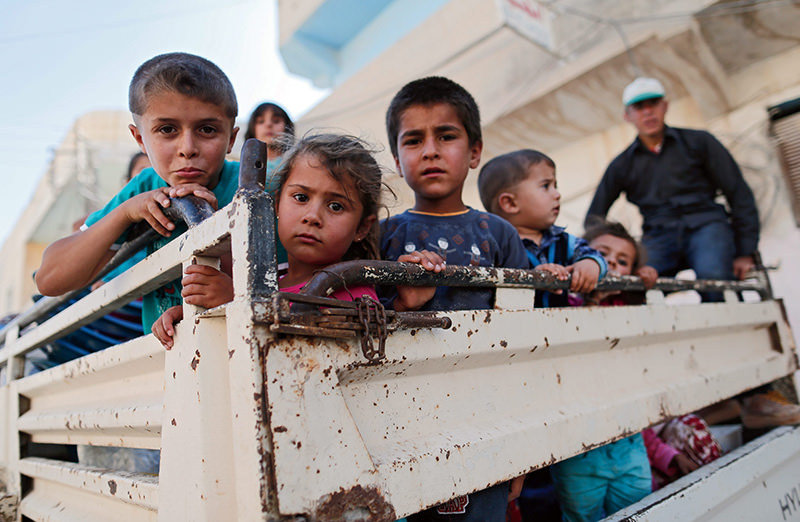 Syrian children are carried by a truck in east of Kobane in Syria, 22 June 2015 (EPA Photo)
by Daily Sabah with Reuters Jun 25, 2015 12:00 am
United Nations aid agencies said on Thursday that a $4.5 billion appeal to tackle the Syrian refugee crisis in 2015 was less than a quarter funded, putting millions of vulnerable people at risk, and had already led to cuts in vital assistance.

The shortfall has meant 1.6 million refugees have had their food assistance cut this year and 750,000 children are not attending school, the agencies and partner organizations said, calling on countries to deliver on their pledges.

"We are so dangerously low on funding that we risk not being able to meet even the most basic survival needs of millions of people over the coming six months," the U.N. High Commissioner for Refugees Antonio Guterres said in the statement which represented more than 200 groups involved in the appeal.

The refugee response plan is a $5.5 billion appeal, with $4.5 billion earmarked for U.N. agencies and non-governmental organizations. An additional $1 billion is intended to help regional countries hosting refugees.

Of the money for the agencies and NGOs only $1.06 billion had been received by the end of May, leaving a $3.47 billion funding gap, the statement said. It did not specify which donors had failed to deliver on their pledges.

"If more funds are not forthcoming soon, up to 130,000 vulnerable families will not be provided with cash assistance to help them meet their basic needs and vulnerable people will stop receiving their monthly food vouchers altogether," it said.

It warned that up to 1.7 million people may face winter this year without fuel, shelter, insulation, blankets or warm clothes. Last year refugees including children died during an especially fierce snowstorm that hit the region.

Syria's conflict is now in its fifth year and has killed more than 220,000 people and displaced around half of the population. U.N. aid agencies have described it as one of the worst refugee crises since World War Two.

Turkey is home to over 1.7 million displaced Syrians, and about 300,000 of them reside in camps located in border cities. The children are estimated to make up half of the Syrian population in Turkey.

The country, which has spent over $5 billion for Syrian refugees since 2011, is the primary host for Syrians displaced by four years of civil war. It has provided Syrian citizens with tent camps and state-of-the-art "container cities," which have been praised by the international community for their exemplary conditions. Yet, the government has struggled to look after others who are unable or unwilling to stay in the crowded camps with limited resources and little aid from other countries.

While those with a relatively good income start new lives in cities by setting up businesses and buying or renting apartments, most Syrians displaced by the conflict are from low-income families. They live in squalid conditions in abandoned buildings and parks while working long hours in low-paying jobs without any form of social security.