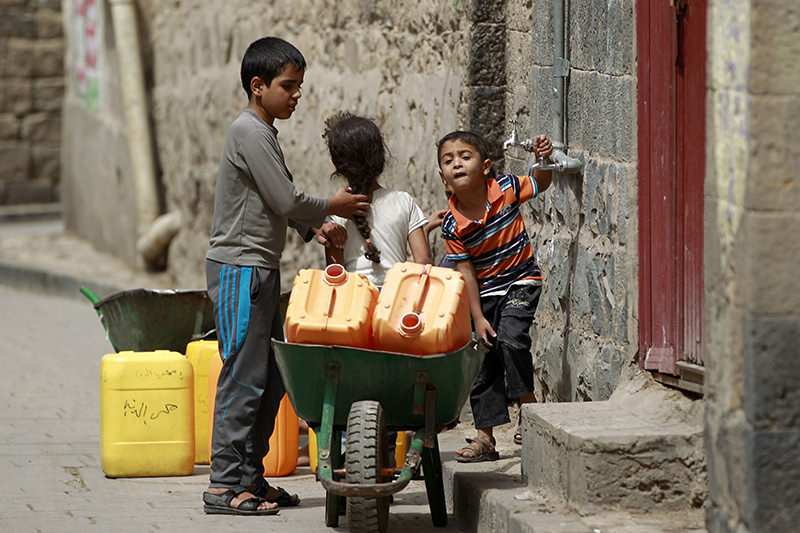 Yemeni children carry jerrycans to fill them with water from a public tap amid an acute shortage of water supply to houses during the fasting month of Ramadan in the capital Sanaa, on June 21, 2015 (AFP PHOTO)
by Anadolu Agency Jun 25, 2015 12:00 am
The number of people suffering from Dengue fever in Yemen has reached 8,036 and the number of deaths stands at 586, the president of the Supreme Medical Committee in Aden said.

Dengue fever is spread by mosquitoes and causes a sudden fever with severe joint pain.

Speaking exclusively to Anadolu Agency, Abdel Nasser al-Waly said that "the number of those stricken with Dengue fever in Aden has increased remarkably over the past three weeks."

"This statistic is perhaps not accurate because it does not include cases that do not reach the hospitals," he added.

The World Health Organization warned on Tuesday of the dangers the disease poses to Yemenis, clarifying that "there have been more than 3,000 cases recorded and the number is increasing."

Aden, the trade and economic capital of Yemen, has been witnessing fierce battles for the past three months between Houthi militias and the Popular Resistance Committees, who are loyal to ousted President Abd Rabbuh Mansur Hadi.

Hundreds of civilians have been killed leading to the spread of epidemics and diseases at an unprecedented rate.
Last Update: Jun 25, 2015 4:37 pm
RELATED TOPICS