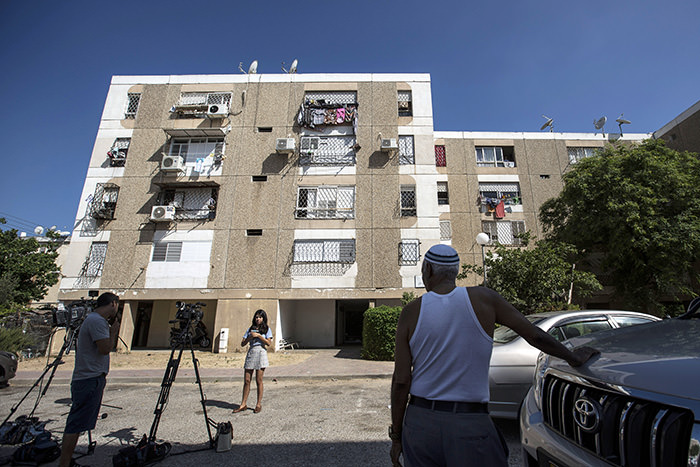 Israeli journalists report outside the apartment building of Ethiopian-Israeli Avraham Mengisto, 28, in the costal city of Ashkelon, Israel, Thursday, July 9, 2015 (AP Photo)
by Associated Press Jul 09, 2015 12:00 am
Israeli authorities say two Israeli citizens are being held in the Gaza Strip, at least one of them by the Hamas group.

The Coordinator of Government Activities in the Territories (COGAT) said that "according to credible intelligence," Mangisto is being held "against his will" by Hamas. It said "Israel has appealed (to) international and regional interlocutors to demand his immediate release and verify his well-being."

COGAT said the second Israeli citizen being held in Gaza is an Arab citizen of Israel. It provided no further details.

Meanwhile, a spokesman for Hamas, Salah Bardawil, declined comment on reports they are holding an Israeli citizen: "We don't have any information about it. Even if is true, we don't have instructions to talk about it," he said.
Last Update: Jul 09, 2015 10:54 am
RELATED TOPICS